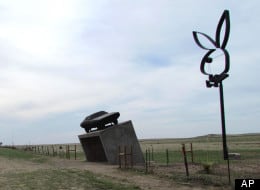 Recently, I wrote some unkind words about the Playboy Marfa roadside attraction.

As my father would say, just because they don’t have a PhD in Linguistics, doesn’t mean cowboys can’t tell when they’re being patronized.

Since then, I’ve had a change of heart. Maybe I was being too negative.

Or at least, maybe there is a silver lining to all this…

I mean, for all the vast ocean of tackiness that the Playboy brand floats in, at least THEY TRIED to do something different.

At least they tried to send out A SIGNAL that hey, we’re going to TRY to shake things up around here.

At least they’re TRYING to do a Culture Hack, TRYING to be relevant.

Doing a Culture Hack is how brands become more meaningful; that’s how greater meaning is attained.

This is a wall I ran up with brand managers all the time, back in my advertising days.

They wanted to do a Culture Hack, yet they didn’t want to do anything risky. ESPECIALLY anything that would risk their own job.

So what you usually ended up with was not much of anything. Just a lot of too-little-too-late.

That’s the bad news. The good news is, *thanks to the Internet*, Culture Hacks have never been easier or cheaper to implement. So I remain optimistic.

I’m guessing somebody at Playboy figured, hey, this will probably fail, but we’ll learn a lot and be enriched by the process, which will turn into a good ROI down the road.

That’s how I would have justified it to my boss, if I worked there.

It’s been at least three decades since Playboy was an interesting cultural force. For all the things I don’t like about Playboy Marfa, it’s good to watch them making an honest effort at getting their mojo back. Rock on.