The US National Defense Strategy called for US armed forces to be more innovative.  The United States Air Force then set out on a critical mission to innovate and to empower its airmen and civilian employees to become innovators. To help facilitate this, the USAF deployed an innovation platform called IdeaScale. This dedicated hub was implemented to recruit airmen and civilians to submit their innovative ideas, votes, and comments to senior leaders for consideration and implementation.

With the help of Gapingvoid Culture Science© Group, the USAF realized an extraordinary upsurge in engagement by airmen and civilian employees in its innovation program. What’s also important is that innovation was an outcome of a broader culture change effort that impacted and improved the way everyone works across the board. 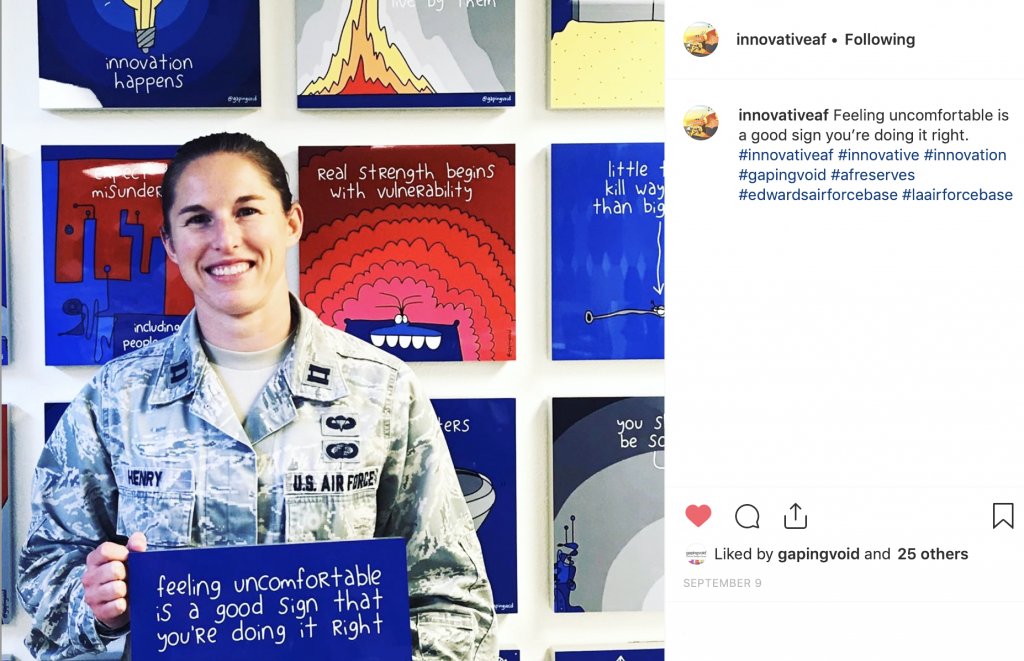 “The most impactful portion of our innovation journey has been the base-wide cultural change.  This intentionally crafted culture change has created a true innovation movement that is improving our ability to achieve the mission and boost quality of life.” – General E. John  “Dragon” Teichert, Commander, Edwards Air Force Base.

The Challenge Facing The USAF Flight to Innovation

By design, the military is grounded in rules, regulations and a respected chain of command. This rigid structure fosters military-grade accountability, rigor and combat effectiveness. When it comes to innovation, however, rigidity can be a countermeasure to the desired thinking. Operating in what is perceived to be undisciplined areas of creativity and ideation are foreign to the system. Often, people don’t feel safe to share ideas that might challenge convention. Innovation, however, thrives in more dynamic, risk-taking environments. This is a challenge the USAF set out to solve at scale.

Adoption of IdeaScale was faltering, and senior leaders viewed this as a foundational challenge to solve.

The USAF also encountered another set of unforeseen challenges. For example, within the 412 Test Wing (412TW) at Edwards Air Force Base, there was no common understanding of what innovation is and what it is not. There was confusion about what a culture of innovation is, or even how to define culture. More so, it wasn’t clear what “achieving” innovation looked like or how to measure its importance and impact. Consequently, innovation became elusive and overly complicated.

The challenge of innovation is a very human one. Some of the immediate feedback cast a light on where to prioritize attention:

Ultimately, the lack of engagement around the innovation effort led to confusion, a lack of support and a waning pipeline of ideas and overall engagement.

To innovate at scale takes a culture of innovation, one that operates within the strict regiment of the military. Gapingvoid Culture Science© Group was engaged to design a culture of innovation. But to do so, it had to first create alignment. Gapingvoid’s unique experience in driving culture change in large organizations was ideal for zeroing in on empowering airmen and employees to be creative, cut red tape, take risks, and to challenge the status quo.

To effectively design and scale a culture of purposeful innovation, Gapingvoid utilized its proprietary Culture Science© methodology that allowed them to collect data, design and implement a culture where innovation would thrive. This unique methodology to Culture Science© would drive rapid change up and down the chain of command. This is exactly what was needed to create that sense of alignment, mission, and sense of safety and motivation that was missing.

One primary objective Gapingvoid set out to deliver was an understanding of the emotions and complexities preventing airmen from participating in IdeaScale.

In its research, Gapingvoid identified what was really missing; wasn’t intent, infrastructure and technology around innovation. What was missing was a clear mission, vision and articulated beliefs that established new norms and defined a sense of urgency, inclusion, and motivation to create a movement around innovation.

They identified that the current culture was fear-based, where people used rules as excuses and innovators were sometimes punished. This led to an organization in stasis.

Gapingvoid’s initial objective was to design a new culture of action and connection to innovation by articulating, defining, spreading the cultural norms to socialize a new way of working within the 412TW at Edwards. Over time, the program would scale to other bases.

One of the stated goals for the program was to raise the activity on IdeaScale from less than 50 to 1,000 interactions, including ideas, votes, and comments. In fact, the project delivered in excess of 4,500 over just 90 days.

Through a series of live conversations with airmen and leadership, Gapingvoid surfaced individual narratives, perceptions, and misconceptions around innovation. The company also conducted onsite reviews of communication channels and meeting dynamics and processed narrative data. These insights led to the establishment of vital cultural drivers and a compelling future motivating state to rally people around the movement and desired outcomes.

Gapingvoid introduced a culture change campaign titled, “Eddie’s Big Quest for Innovation,” featuring a visual mascot named “Eddie the Innovation Dragon.” Eddie was created to be both relatable, inspiring and also give airmen and civilian employees at Edwards motivation to participate, engage and share ideas in IdeaScale. Eddie was brought to life in a series of semiotic tools including:

Gapingvoid also identified core groups of influential airmen, employees, and leadership for deeper training around “Eddie’s Big Quest for Innovation.” This group was briefed on the strategic nuances of Culture Science© program, the use, and purpose of Semiotic tools, the strategy for spreading norms, and the role and mission of each cultural artifact. More so, the core group was briefed on the human dynamics of culture change and innovation so they could serve as stewards for the movement following Gapingvoid’s departure.

Immediately, the results of the Gapingvoid’s efforts realized a dramatic uptick in engagement and interactions of ideas, votes, and comments. Engagement was so extraordinary, that Edwards Air Force Base outperformed other US Air Force innovation initiatives across other bases resulting in more than 10 times the utilization of IdeaScale.

Over time, as Eddie the Innovation Dragon gained in popularity, engagement continued to soar. The purple line represents Gapingvoid’s work in driving initial participation (purple line) and also again as it scaled through new initiatives (orange line). Overall, Gapingvoid and Eddie the Innovation Dragon realized a ~570% increase in participation over a parallel, top-performing innovation engagement pilot. 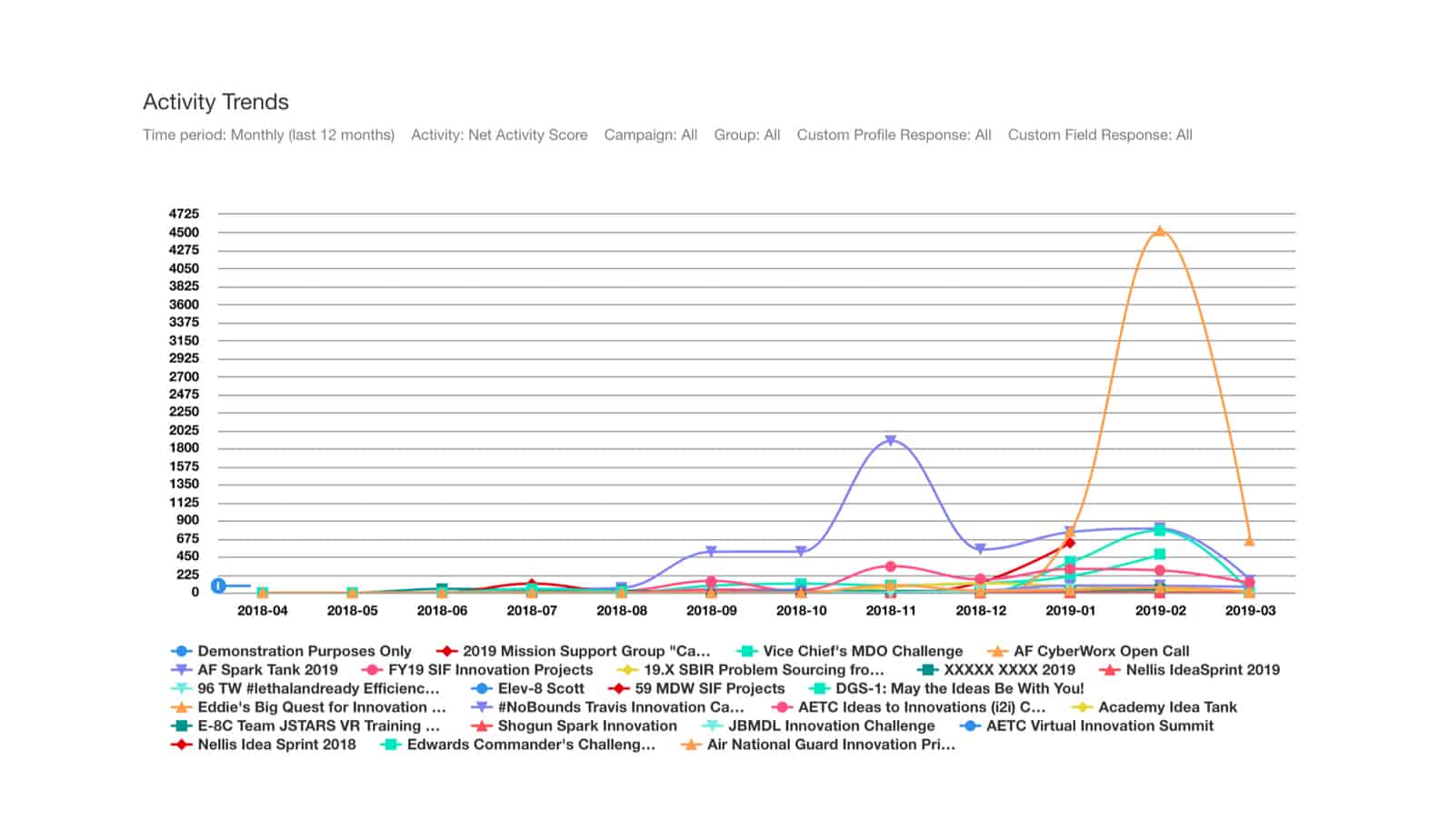 The results of Eddie’s Innovation Challenge created alignment and incredible engagement among Active Duty, Civilian, Contractors, and Guard/Reserve personnel. But, the greatest impact was the change of culture across the base. The work, which is now expanding in scope and to other bases, changed how people actually get work done. Innovation was the outcome of doing work differently. That’s what’s interesting.

The commander at Edwards 412TW, Brig. General Teichert, continues to use the tools to drive a culture of greater accountability, bias to action, and commitment to creative thinking. He is so enthusiastic about the program that he has stated that he “Would recommend Gapingvoid to anyone, even after I leave this command.”