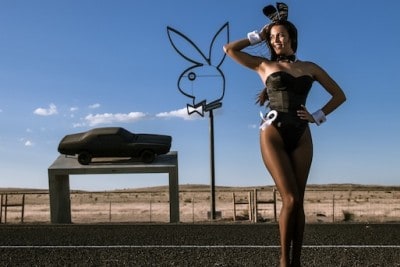 The New Republic has a great article on the controversial Playboy Marfa installation.

In case you haven’t heard, Playboy went ahead and built a big ol’ piece of roadside art, just outside the legendary Texas desert art town of Marfa, a place I have a lot of personal history with.

Not to mention, somebody had already tried this brand of “designer scandal” with Prada Marfa almost a decade ago… but at least that was just using Italian shoes and handbags, not blatant 1950’s-style sexism.

At least it was a first, back then.

All in all, like the rest of the Playboy brand, it’s kinda tacky; it seems too-little-too-late to reverse the once-mighty publishing empire’s ever-decreasing fortunes. 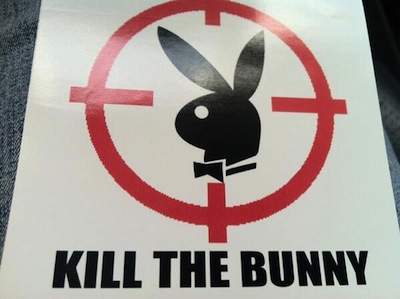 But it’s not just about Playboy, there’s something much larger going on. As The New Republic’s Jason Ferago wrote:

But Playboy Marfa— what a phrase— does say something about the art world today: There is nowhere immune from the market and from the marketers, not even the middle of the desert. The guiding spirits of Marfa may be rolling in their minimal graves, but in today’s art world there was no preventing such a corporate invasion.

Yep. Art and Money colliding into each other yet again, the fight that never seems to want to end. The great art critic, Robert Hughes lamented about the same thing, thirty years ago. Plus ca change…

Commerce or no commerce, the fact is, the Fine Art world is having much the same trouble as Playbody i.e. Culturally, it used to be a big deal, but now it no longer is. The great teachers are coming from somewhere else, mostly via the Internet.

The good news is, this spiritual gaping void left by the big galleries creates HUGE oportunities for anybody who really wants to give a damn about something. The world has never been hungrier for it, has never been more willing to pay for it. Artist or non-artist, we live in incredible times…