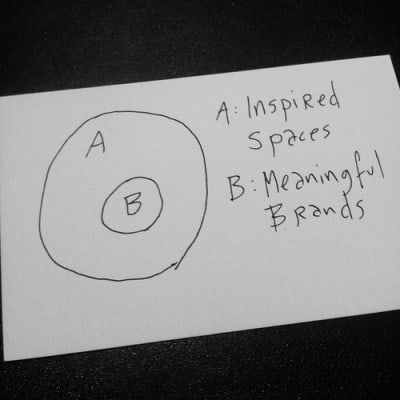 [Some more thoughts on the “Inspired Spaces” riff etc., “Hugh’s Big Theory of Nearly Everything” etc.]

2. Inspired Spaces can be anywhere or anything, indoors and outdoors, abstract  or physical, event or object.

3. When done correctly, my day job, Office Art, helps create Inspired Spaces (Of course it does). But it can’t do it all by itself. Having a business with a Meaningful Brand also helps.

5. There’s such a thing as an Inspired Headspace, too. It isn’t just molecules.

6. Inspired Spaces give a place for Meaningful Brands to live in.

7. Inspired Spaces is just about being in the zone, physically or mentally. People can be in the zone, sure. But so can businesses, ideas, brands, political movements, rock bands etc.

8. Religions have always known about the importance of Inspired Spaces. Hence the Michelangelo on the ceiling, the golden candlesticks on the altar, the burning incense, the 6-thousand-pipe organ and the stain-glass window. They design it all to get the congregation into the zone, into Inspired Headspace.

9. When politicians want to make themselves appear important, the first thing they do is call up a famous architect. Hence Sir Norman Foster and the new German Reichstag building etc. Not unlike the thinking in Point # 8.

10. People with money spend their money on building or buying Inspired Spaces for their families to live in, preferably the kind of Inspired Space that leaves the people they left behind long ago, looking up in awe.

11. Creating an Inspired Space is easy. Just stick a twenty-million dollar Picasso on the wall, and watch what happens. Ditto with a nice, ten-million-dollar Brancusi sculpture in the corner.

12. As Einstein proved, Space and Time are really the same thing. “Spacetime” etc. So a period of time can also be an Inspired Space, too. Think about that glorious summer in Maine you had as a kid. Or that year you spent working in Singapore. You were in the zone. Exactly. You were living in an Inspired Space. Exactly.

13. The client’s brand is either living in an Inspired Space or it isn’t. And if it isn’t, it’s our job to help get it there.

14. Companies that want to innovate must first create an Inspired Space for that to happen, not the other way around.

15. A two-dimesional piece of art on canvas, paper, computer screen can be Inspired Spaces; that’s certainly my work’s intention.

16. A blog can be Inspired Spaces. So can a photograph or a poem or a peice of music or graphic design.

17. Foodies like to turn the dishes they create into Inspired Spaces.

18. A lot of people think of celebrities as Inspired Spaces, any personality cult will do the same.

19. People who have had a lot of of media attention will often try to turn their life story into Inspired Spaces. Then again, the same can be said about barflies.