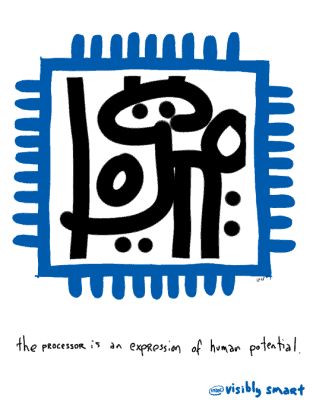 [“The processor is an expression of human potential.” One of the art pieces we did for Intel, loved by the CEO, now hanging in their boardroom etc.]

1. In terms of government spending, Rome’s first Emperor, Caesar Augustus pretty much had the biggest art budget in history. Even more than the Medicis. Way, way more than modern moguls like John Paul Getty or JP Morgan.

Augustus spent so much money because he knew what people in power have always known, that of all the ways of spreading ideas, Art is probably the fastest and most effective way of making it happen.

As Seth Godin famously said, “The ideas that win are the ideas that spread”.  Ergo, Augustus was very keen to spread the “Augustus is awesome” meme all around the Empire. He started spending big-time, in all the major Roman cities, on art that glorifed his name. He pretty much created a widespread cult of Augustus.

“I turned Rome from a city of bricks, to a city of marble,” he famously quipped.

Of course, he was operating in a time before mass media, mass literacy, printing press, televison and radio etc etc. Back then “Art” had a virtual monopoly on spreading big ideas.

Later emperors- Hadrian, Caracalla, Dilocletian, etc- learned from his example to promote their personalEmperor-cult brand . And even before the Goths sacked Rome in 479 A.D., the Christian Bishops were doing the same, albeit for a different deity.

2. Art is a GREAT way to spread ideas, period. It doesn’t matter if we are talking Warhol’s Campbell Soup Cans, or The gapingvoid Blue Monster,  art has a magic quality that makes people want to share. And in today’s hyper-connected world, that is magic.

Emperor Augustus got me thinking how funny it is that, in today’s business, it’s the “external idea spreaders” (advertising, PR etc) that get all the glory. TV commercials and PR campaigns are sexy, expensive and glamorous.

Far less sexy is what they call “Internal Communications”, or “Internal Comms” for short. People pretty much associate that with corporate memos and newsletters full of dry language, stock photography and uninspiring graphic design. Ugh.

But why is that?

Seriously. It SHOULD be sexy, and it isn’t.

It’s such an important part of leadership! Leaders cannot lead unless their ideas first spread inside their company.

This should be a much bigger deal than it is. It certainly was a big deal to Augustus.

3. So how exactly  does a powerful CEO with offices in London, Hong Kong, Dubai, New York, Chicago, Sao Paulo, Nairobi etc etc tell his 5,000 or 50,000 employees what he or she REALLY cares about?

In such a way that people actually want to talk about it in an interesting an meaningful way?

Commission an traditonal advertising campaign? If you have A LOT of money and A LOT of time… Do you really have that? And even if you do, will it actually work? Exactly.

4. With the value of leadership at an all-time high, the “Internal Spreading of Ideas” is an area that businesses and organizations need to be more creative about.

I think art can really help with this, big-time. That’s why I got in the business in the first place.

With that in mind, I’m currently looking for interesting examples of this “art in business” thing. Not for mere decoration, but for reasons of the aforementioned internal communicationa. Be it my art or anybody else’s art, it’s something I really want to riff on. If you know something in this department, I’d be happy to talk to you. Email: hughATgapingvoid.com

[“The processor is an expression of human potential.” One of the art pieces we did for Intel, loved by the CEO, now hanging in their …

[Alan Weinkranz– an old Texas connection of mine- and myself at CES last Saturday etc.] “Intel Processors are smaller than a postage stamp. Intel has …