[UPDATE: This is for non-commercial use only etc.]

I just designed this poster for my buddies over at Microsoft [you know who you are]. If you work for Microsoft, free to download the high-res version by clicking on the image, and print it out etc [My regular licensing terms are here].

I’ve been told by Stormhoek that if the poster gets enough traction within Microsoft and its extended family, we’ll consider doing a signed, limited-edition lithograph of it as well. [UPDATE: The signed lithographs have arrived. Steve Clayton reports.]

[Portrait: click on image to enlarge etc.]
The headline works on a lot of different levels:

Microsoft has seventy thousand-odd employees, a huge percentage them very determined to change the world, and often succeeding. And millions of customers with the same idea.  Basically, Microsoft is in the world-changing business. If they ever lose that, they might as well all go home.

I chose the monster image simply because I always thought there is something wonderfully demonic about wanting to change the world. It can be a force for the good, of course, if used wisely. It’s certainly a very loaded part of the human condition, but I suppose that’s what makes it compelling.

Anyway, Redmond, I hope you like. Feel free to drop me a line, if you have any feedback. Thanks. 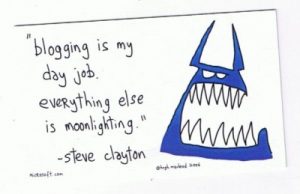 The Blue Monster was designed as a conversation starter. To paraphrase the ongoing dialogue between Steve and I:

For too long, Microsoft has allowed other people- the media, the competition and their detractors, especially- to tell their story on their behalf, instead of doing a better job of it themselves.

We firmly believe that Microsoft must start articulating their story better- what they do, why they do it, and why it matters- if they’re to remain happy and prosperous long-term.

If they can do this, well, we don’t expect people in their millions to magically start loving Microsoft overnight, but perhaps it might get people- including the people who work there- to start thinking differently. Small moves. Helping to improve Microsoft’s corporate culture was no small feat!

[Afterthought:] Granted, none of this is rocket science. But maybe that’s Microsoft’s main problem.

[Disclosure: gapingvoid is more evil than Microsoft. Just so you know.]