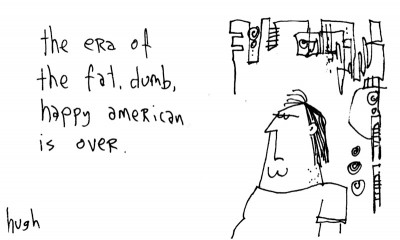 I drew this cartoon this morning, while thinking about a conversation I had a couple of years ago:

I was on the phone to an old friend of mine, a guy in his late for­ties, who was born and bred in Michi­gan, and is living there now. He was telling me about his uncle, who, about four deca­des ago, got his highschool sweetheart preg­nant. So ins­tead of going off to college, he found him­self with a new wife, a child on the way, and an assembly-line job at Gene­ral Motors. But even though this situa­tion clip­ped his wings con­si­de­rably, he still ended up having a nice life in the end, with a home, a big yard, two cars, a steady paycheck, wee­kends fishing or hun­ting deer, and vaca­tions in Hawaii every year or so. “The days where a blue collar guy like my uncle could have a nice life without doing much,” my friend said, “those days are gone. Gone fore­ver.”

And in the back of my mind, I’m thin­king the same is star­ting to hap­pen to white collar guys more and more, as well. But it’s not quite out in the open yet. Society’s not quite ready to have that con­ver­sa­tion.

I also heard a statistic a couple of weeks ago that there are at least thirty million children in China currently taking piano lessons. Thirty. Million.

We live in interesting times…

That con­ver­sa­tion about white-collar jobs is four years old in Spain.

This is the short ver­sion: The peo­ple who were in their 20-30s in the 1970s saw that a Uni­ver­sity degree made a big dif­fe­rence in your job and salary. They made their kids (anyone born 1970?–?1985) study, and that young gene­ra­tion belie­ved for a while that we could do the same trick as our parents. Get a degree. The job will follow.

We now have a word for peo­ple of my gene­ra­tion with a hand­ful of degrees: mileu­ris­tas. Thou­san­dists. As in, someone who makes around 1,000 euros a month. There’s so many of us, no one’s willing to pay us more than a (barely) living wage.