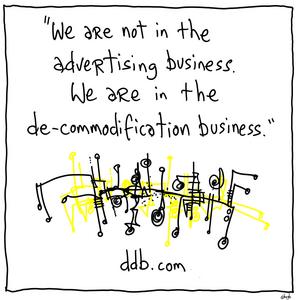 Some random thoughts on “De-Commodification”, in no particular order:
1. Last year I did the above t-shirt design for an advertising buddy of mine in Chicago. He’s no longer at DDB, but what the heck.
2. Being in the $10 wine business, “De-commodification” is a subject dear to my heart. One thing the world is not short of is… vast lakes of unsold wine.
3. When I hit a certain age, I also learned the hard way that the the world was not short of thirty-something journeyman advertising creatives, either. Nothing like feeling a commodity oneself, to pique one’s interest in de-commodification. Heh.
4. You know the phenomenon when a company gets too big and too rich, and the next thing you know, the middle-manager politics take over? Starts sucking the life blood out of the company? The start of inevitable and permanent decline? Know what I mean? The more time I spend on this side of the pond, the more I think this company allegory applies to these United States, as well.
5. Last week I was on the phone to an old friend of mine, a guy in his late forties, who was born and bred in Michigan, and is living there now. He was telling me about his uncle, who, about four decades ago, got his highschool sweetheart pregnant. So instead of going off to college, he found himself with a new wife, a child on the way, and an assembly-line job at General Motors. But even though this situation clipped his wings considerably, he still ended up having a nice life in the end, with a home, a big yard, two cars, a steady paycheck, weekends fishing or hunting deer, and vacations in Hawaii every year or so. “The days where a blue collar guy like my uncle could have a nice life without doing much,” my friend said, “those days are gone. Gone forever.”
And in the back of my mind, I’m thinking the same is starting to happen to white collar guys more and more, as well. But it’s not quite out in the open yet. Society’s not quite ready to have that conversation.
6. The best way to offset one’s own commodification is to build one’s own personal “global microbrand”, irrespective one own employer. “Brand You”, as the great Tom Peters called it way back in 1997. A good blog works about as well as anything. And no, you don’t have to be an A-Lister. Just look at what people like James Governor or Thomas Mahon are doing.
7. I wish I could think of a better term than “De-Commodification”. It’s an unwieldy word.