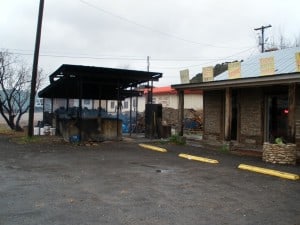 Lum’s Barbecue, Junction, Texas. This is where I normally stop for lunch when I drive between Alpine and Austin. Just over halfway.

That smoker’s been there over 3o years, they tell me. And the guy who smokes the meat has been there even longer.

One more reason to love living out here.

People were quite surprised when I moved out to Alpine, nearly two years ago. They had gotten used to me being from New York or London.

But I had always imagined ending up somewhere like here eventually. It was just a case of waiting for both the Internet and the ol’ art career to reach a certain critical mass. When that day finally arrived, the move happened rather quickly.

And it could not have happened at a better time. In the last few months business has gotten a lot more hectic. For reasons still unclear to me, the private commissions just started coming in faster and faster. Why now, I wonder? I don’t think I cold have coped with it nearly as well, living in a big city.

As I’m fond of saying, Success is more complex than Failure. This quiet, pared-down, unglamorous, low-maintenance West Texas life in the high desert seems to be my way of dealing with it.