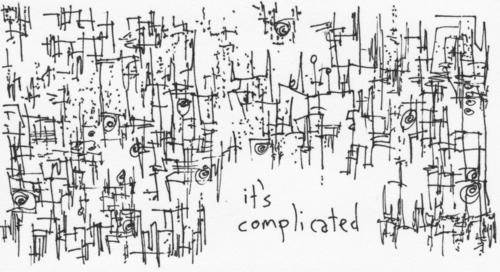 Rudyard Kipling once described Triumph and Disaster as “Imposters, both”. The longer I stay in the working world, the more I start to get what he means.
It’s funny how you can have two guys sitting next to each other in an office, both doing the same job. Both using the same computers and phones. Both with the same academic qualifications. Both with a similar IQ. Both working the same amount of hours. But why does one guy take home five times more sales commission than the other guy? What’s going on? Is it luck? Skill? Justice? Injustice?
The question of what separates success from failure, is something I’ve always liked to ponder on. Suddenly this week, out of nowhere, the following line hit me:
“Success is more complex than Failure.”
Think about it. Being a failure is a no-brainer. All you have to do is sleep till noon, get out of bed, scratch your balls, have your morning visit to the bathroom, turn on the Star Trek re-runs, help yourself to some breakfast [Leftover pizza and a bottle of Jack Daniels, Hurrah!], light up your first joint of they day, download some porn, and already you’re well on your way. Sure, a few inconvenient variables may enter the picture here and there, to complicate an otherwise perfect day of FAIL, e.g. what you’re going have to say to your brother in order to convince him to lend you that $300, so you can pay off the telephone bill, that kinda thing. But for the most part, the day-to-day modus operandi of your “Average Total Failure” is quite straightforward.
Being successful, however, is a whole different ball game. Breakfast meetings at 7.00am. Conference calls at midnight. Visiting twelve cities in five days. Fielding question from a swarm of hostile journalists. Dealing successfully with an enraged, multi-million dollar customer who’s screaming bloody murder over something rather trivial in the grand scheme of things. Dealing successfully with an enraged, multi-million dollar investor who’s screaming bloody murder over something rather trivial in the grand scheme of things. Making sure there’s enough money in the account to meet the payroll of all your legions of highly-paid, highly-effective, highly-talented employees. All these hundreds of unrelenting issues to deal with, all day, every day. You get the picture.
And as always, what’s invariably true of people is also invariably true for businesses. So when I see a small but insanely-successful business suddenly implode overnight [it seems to happen quite a lot in Silicon Valley], I’m guessing chances are it wasn’t inability to manage growth per se that destroyed the business [a favorite reason cited by those writing business obituaries], but the inability for the business to manage complexity. Complexity increases exponentially with growth, most small companies can culturally only handle incremental increases in complexity. As I’m fond of saying, “Human beings don’t scale”.
Which is why walking around the hallways of large, successful companies can often seem so oppressive to somebody new to it. All that cultural regimentation is there for one reason only: To fight “The Complexity War”. Sure, it might feel a bit ghastly to the more idealist and free-spirited among us, but until somebody can come up with a better way to win this Complexity War at a Fortune-500 level, I don’t see it ever going away.