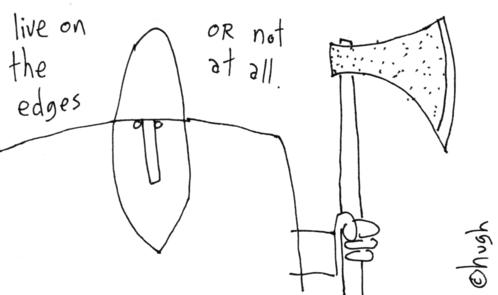 [“Edges 3”. Part of “The Edges” Series. Click on image to enlarge etc.]
Alpine, Texas. A lot of my friends in this town work in the construction business; a lot of former big-city people are moving into the area these days, mostly trying to get away from the urban sprawl. So that’s where a lot of the local well-paid jobs are. As a result, knowing what I know, a lot of my friends end up picking my brains for marketing advice, which I’m happy to give them.
What I usually do is start out by telling them about the local Alpine farmer’s market, which happens here every Saturday.
Our farmer’s market has one main problem: This isn’t farming country. This is high mountain desert. This is ranching country. People harvest cattle and oil round these parts; they don’t do so well with legumes.
The people selling the produce for the most part are local amateur gardeners, who primarily grow what they need for themselves, then sell on whatever surplus they have to folk like me, for a little extra cash.
What does this mean? It means you have to get there early, because the market opens at 8.30 in the morning and is COMPLETELY sold out within 45 minutes.
Whole Foods? Forget it. You really have to drive to Midland, 150 miles away to get anything closely resembling what you’re used to in the big cities. The local supermarkets do what they can, I’m told they’re a hell of a lot better than they used to be, but… there’s still a long way to go.
There’s something so interesting to me, that in this modern, over-supplied world, the supply for something most of us educated, blog-reading types take for granted- high quality food- falls so short of actual demand. There’s plenty of people in this town who’d gladly spend more money on quality food if some enterprising person would set them up, so why isn’t it happening?
I’m optimistic. I believe it’s just matter of time before the aforementioned enterprising person spots the glaringly obvious gap in the market, and actually does something about it. This is Texas, after all. Sitting on your ass doesn’t get you too far in these parts. Stuff tends to happen if there’s enough people willing to pay for it.
So I tell my construction friends, well, what’s true in the local food market is also true in the construction market. There’s a lot of people from the big cities moving in with a lot of money in their pockets, compared to what the locals are used to making. And they’re used to a certain level of service which a lot of the time, THEY ARE SIMPLY NOT GETTING. The construction person who can ACTUALLY understand and ACTUALLY cater to their ACTUAL needs will win. The construction person who still wants to do it same-old-same-old will have a much harder time of things.
Then knowing this, the only question that remains is, which construction person are you going to be? The Trailblazer, or the Same-Old-Same-Old? Only you can answer that.

Reminded an old Ginger Meggs “Living on the edge, I had fallen off long ago”

…those who like being in the middle of the herd, no doubt have their nose up someone’s ass…
I’ll take my chances being on the outside of the herd. To me it means “fresh air”…

I can not WAIT for more of your insight into the construction industry!!!…

Thanks for the kick in the pants. Sometimes we see the need but aren’t sure whether there are enough “educated, blog-reader types” locally to sustain us. So we don’t move as fast as we should.

Why are there no fresh fruits and veggies in Alpine?
Over $4 a gallon for diesel and very little profit margin in produce.
Fix that problem and you’ll have your fresh peas and carrots in no time.

You fail to mention how really, really nice Alpine is. No Wally-World, hardly any chain stores at all. It’s a groovy little Tejas town, and it’s even close to Marfa!

It strikes me that there is a contradiction of sorts brewing here, Hugh.
It has always seemed to me that you idealize Alpine because it is what every other place ISN’T. If all of these folks in Alpine set out to accomplish efficiently building trophy homes for the moneyed folk fleeing urban sprawl & then starting a Whole Foods sort of store to cater to them . . . where the hell does it all end? Will this not lead to an Alpine Texas that is just a newer version of urban sprawl? After all, by definition, “sprawl” does NOT respect boundaries. Once it crosses the line into utopian small towns – life is never the same & those wanting to live in utopia must again flee.
Is not the charm of Alpine the very fact that its farmers market IS only able to sustain 45 minutes of sales? Or have I been misunderstanding your passionate love-affair with your beloved town all these months?
Just as society inevitably chastises those whom it previously idealized as individuals, so to do utopian ideals crumble under similar weight.

I seem to be a “same ‘ol same ‘ol” on the outside with that “trailblazer” stuck inside. Thanks for putting a few more knicks in that armor. *smiles* Someday that trapped side just might get out!

The enterprises you seek will probably come. But, do you really want it? The beauty of your environment in isolation of the franchised businesses would slowly ( or maybe not so slowly) fade and as the previous commenter suggests, you would want to find a new paradise.
Could be an “evil plan”. Hmmm…

The gap doesn’t necessarily have to be filled with corporate, sprawling supermarkets. Much of the gap actually exists between Whole Foods and farmer’s markets, whether in Alpine or Chicago. And solutions that Hugh is alluding to would incorporate a much higher level of service than is available at either end of the spectrum. If there was a shop that worked with local growers year-round, included some healthy, sustainable prepared options and had a couple of friendly, knowledgeable staff it would be a hit anywhere. Even if you love the farmer’s market over Whole Foods, wouldn’t it be nice to go more than once a week? And it would encourage local farmers to grow more, knowing that there was a consistent market that didn’t require them to handle all of the distribution too.

I am on the side of the “locals that toil in the soil”. As far as service, I sure wouldn’t want to act like a grocery store clerk for city folk who probably have more money than brains. I belive you used the word “cater”…
“Those who aren’t growing are owing.” Not the other way around.
I would pay for quality and unbeatable taste that a supermarket could never give. For service…I would want an expert to take a few seconds (or secrets) and to tell me how they managed to grow such beautiful produce.
But, for some crazy citified people-age, who think sticking their thumb in a melon and asking for half off the price is the normal thing to do, then they should go straight to the supermarkets where people won’t chase you with a pitchfork.

There is always a “local solution” that could encourage the local producer to grow. Letizia. http://www.letizialisi.com