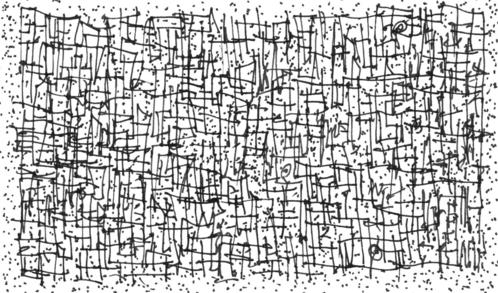 [“Edges 1”. Part of “The Edges” series. Click on image to enlarge…]
Over the weekend while I was working on the above drawing, from out of nowhere the phrase, “Live on the edges or not at all” suddenly popped into my head. So I used that line for the drawing’s title etc.
Since then the line has stayed with me. I’ve been giving it a lot of thought. What exactly do I mean by it? Here are some notes, in no particular order.
1. There are lots of edges. The phrase, “Living on The Edge” often connotes something negative. Think of Jimi Hendrix, dying young from drug and alcohol abuse. Or William Blake, whose visionary art and poetry was never properly understood in his lifetime. Or William S. Burroughs, and his crazy years of lonely exile. All living on the edges of Society. All paying a heavy price for the privilege. You get the idea.
But there are other edges out there. Plenty of them. Apple obsessing about industrial design. Dell obsessing about their customers. Microsoft obsessing about software problems that may not even exist yet. Though their business models are all quite different, they’re quite edgy about what they do as individual companies. And this is PRECISELY what made them so successful- the edge part, not the middle part.
2. And we’re not just talking about computers. While most people are happy to sell business suits for a couple of hundred dollars, here’s Thomas selling them for $5000. He’s selling at the very extreme, high-end “edge” of the suit market. Or Max Brenner and his incredibly expensive chocolate. Price-wise, he’s also “on the edge”, and people can’t get enough.
3. “Edgelings”. This term was coined by a friend of mine, Stowe Boyd to describe people who gravitate towards the edges. So far I’ve heard nothing better.
4. The Herd. When sheep flock together, in order to protect the collective, the strong end up in the middle of the flock; the old, infirm and weak end up on the outside of the flock, leaving them easy pickin’s for any predators who may be nearby. If you read Mark Earl’s fabulous book, “Herd”, you soon realize that human beings aren’t that different. For all the heroic individualism Western society likes to idealize [almost to the point of fetishism], humans are surprisingly “Herd-like” in their behavior.
Just as sheep move to the center of the flock for purely survival reasons, so do human beings. It’s why we wear khakis and join tennis clubs. But some of us move to “the edges” for the exact same reason- Survival. “If we stay in the middle, we’re just going to get creamed like everybody else, once the market moves on.” I don’t think “Edgelings” consciously choose to be this way- like every other mammal out there, they just want to get on with their business without being eaten by wolves. Declarations like “Live on the edges or not at all” come after the fact- as Mark Earls would say, it’s more about justifying past behavior, rather than ensuring future behavior.
5. What’s true in life, is also true in marketing. The great advertising and marketing thinker, Russell Davies says that a brand’s Number One job is to be “Interesting”. I agree. And I also seriously, seriously believe that if you’re on the hunt for “Interesting”, you’re going to find it far more easily on the edges, not in the middle.
As my friend and mentor, Seth Godin told me over dinner a couple of years ago, while I was picking his brains for marketing advice, “The edges. Always keep pushing on the edges”.
Exactly.