One of the smartest people we know is the Political Economy professor from Brown University, Mark Blyth. Before NN Taleb was a thing, he gave Mark the draft manuscript of his famous Black Swan book to proofread before it was published. That gives you an idea of how clever he is.

Mark has a lovely current affairs podcast he does with his Brown colleague, Professor Carrie Nordlund, called The Mark And Carrie podcast. It’s worth checking out.

For a while now, Mark and Gapingvoid have been talking about doing a book together where Mark points out the top 50 mistakes that pundits make about economics, and we illustrate them in truth/lie format.

Below are four sample pieces Mark wrote with Gapingvoid illustrations to match. We hope you find them fun. Our goal is to get the book written by next year as a way to get more people connected to Mark’s work (totally deserved, in our humble opinion). Stay tuned. 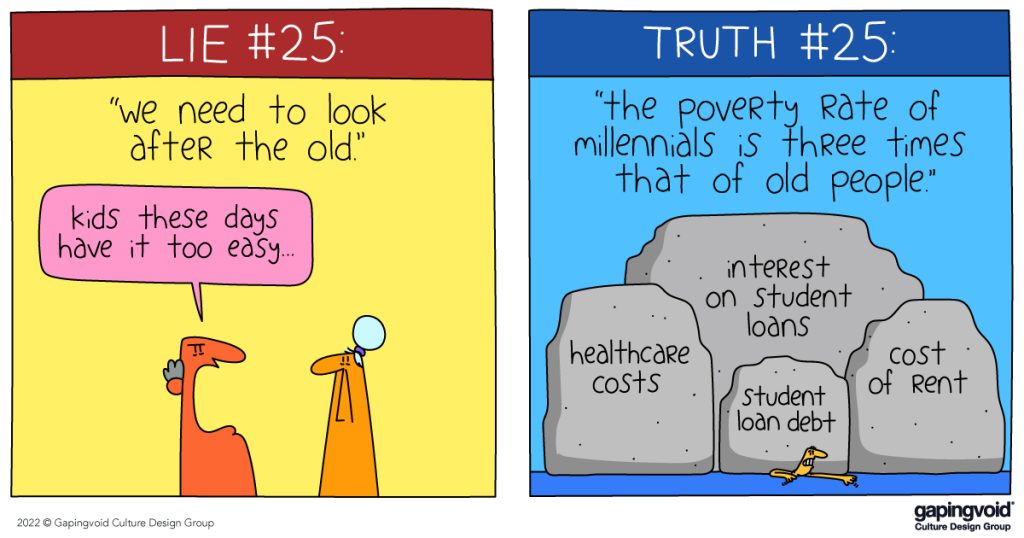 Maybe it’s because your average Congressperson seems to be about 80 years old and they are all, repeat all, millionaires, that there is this bias towards the old. But when you look into it, you find that while it’s absolutely true that not all old people are rich, pretty much all rich people are old. Millennials in particular got the short end of the stick on this one, and until they start voting in similar numbers to boomers, it’s not going to get any better for them either.

States and households. Where to start…

Do you get to issue your own currency? Do you get to issue intergenerational debt that will be paid off by the taxes of people not born yet? Do you get to decide what taxes get paid in? Do you get to manufacture the only thing taxes get paid in? Do you get to bring people into your household and tax their children to pay the debts you accumulate today? The answer to all of those things is obviously no. But states do. The first is called sovereign currency. The second is sovereign debt. The third and fourth are why you spend five months of the year working to accumulate bits of paper that you send back to the people who print the paper. The last is called immigration. The budget of a state is nothing like that of a household. Next time you hear someone saying that, correct them, nicely.

The national credit card. This one is even dumber.

Who sets your credit limit? Your credit card company. What’s it based upon? Your ability to earn. Who sets the state’s credit limit? If you are the US, the rest of the world through their desire, which never ends, to own dollar assets. The easiest dollar asset to buy? A US treasury bill. So as long as people want to hold dollars they can do so by buying our debt. And so long as there is no other reasonable alternative, there is no limit on the card. Really.

Cutting spending to cure a recession

Tried in 2010-14 in the Eurozone. It was a disaster. If the private sector poops its pants and tries to save, the economy shrinks. If the public sector does so at the same time, it shrinks even more. How that is supposed to make the economy bigger is one of the fantasy stories of economics. It usually features confidence fairies who are now super interested in investing in an economy because things are crappier than before and everyone is unemployed. One of the silliest ideas around and one of the hardest to kill. A true zombie.

For more content like this, check out our podcast review featuring John Cleese talking to James O’Brien on creativity.