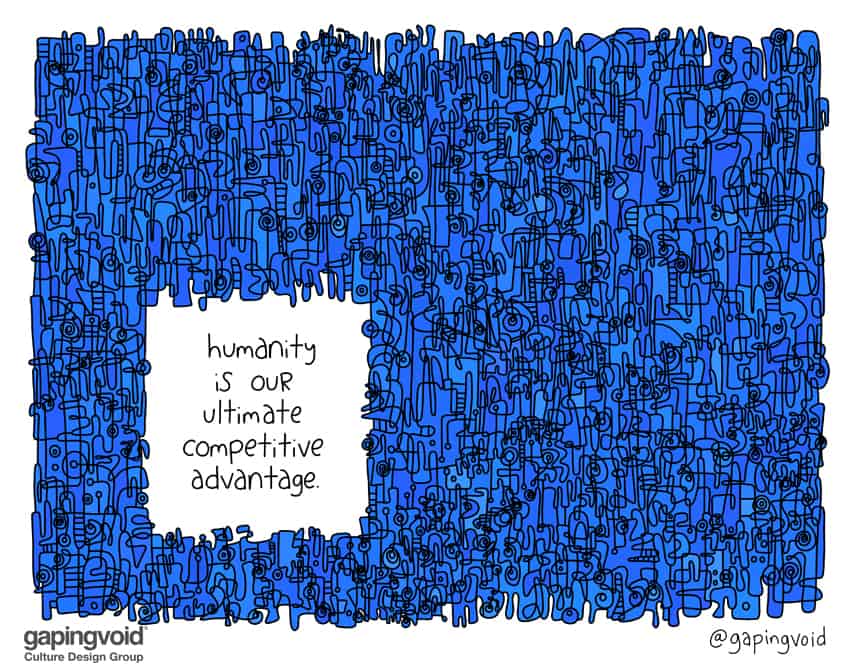 The sad news was all over the media this weekend: Former Zappos CEO, Tony Hsieh passed away under pretty awful circumstances.

We are gutted. A big part of why Gapingvoid has developed the way it has is thanks to Tony. Around 25,000 people a year go through the famous Zappos culture tour, and the only thing that most people ever think is: “This is cool, but it would never work in my business’”. While that may be largely correct, we were so fortunate to be able to deconstruct the things Zappos does that do work, so we understood the principles and could apply them in ways that worked elsewhere. Of course, in hindsight, Tony had thought about ‘Culture as a Management System’, but no one ever really expressed it that way.

[Bonus: Our archive has around 300 images that we created at various times for Zappos. Here is a link to about 100 of them – we hope you find them intriguing.]

This all happened simply because Tony was so kind to us. Our relationship with Tony goes way back- Zappos was an early client of ours. Tony was an amazing supporter, FOG (Friend of Gapingvoid). He visited with us in Miami, and at a time when we were executing a project at the University of Miami. He offered his team to fly in and do a panel with us; when he went off Twitter for a few years, his pinned Tweet was the sign-up link for this newsletter, which he occasionally wrote for.

We always remark to ourselves that we are in an incredible position, where we are able to learn and experiment all while we deliver our services for our closest clients. This was especially true at Zappos, and so we thought it fitting to list ten insights we gained from our work with Tony.

One more factoid that most people don’t know about Zappos: Tony, Fred, Alfred, a few employees, and Sequoia Capital were paid $1.2 billion in Amazon stock in 2008. Venture Beat reported in 2010 that Sequoia received $248M, so that left almost a billion of  Amazon shares to insiders. Today that original $1.2B is worth between $50-$60 billion. It’s kind of crazy that what started as an online shoe retailer created so much value.