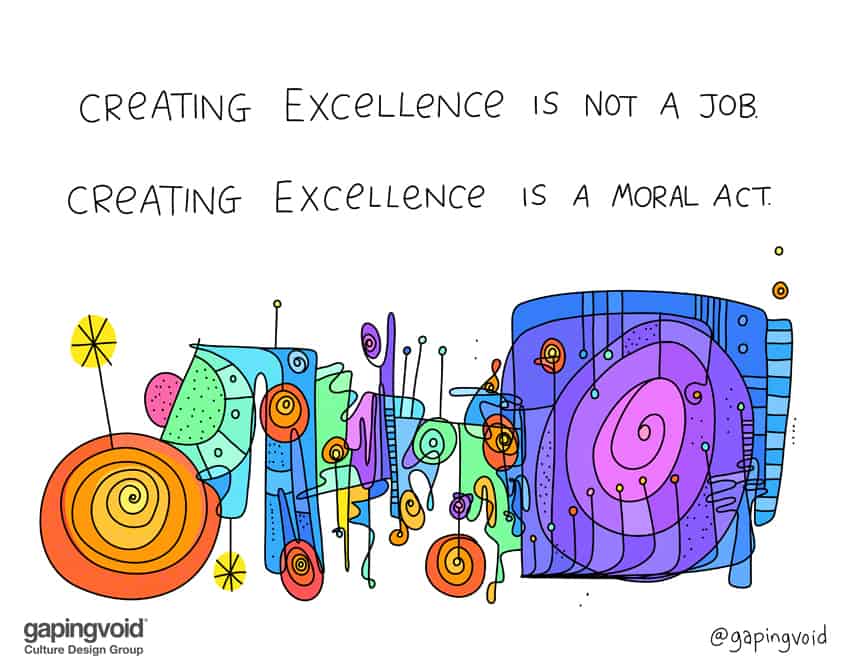 Our Twitter friend, the bestselling author Tom Peters, famously made the word, “Excellence” a thing since the 1970s, when his groundbreaking book, “In Search Of Excellence” caught the imagination of the business world back in the 1970s.

Sure, “Excellence” is one of those words that execs like to overuse, like to throw around the office like confetti. Why? Because it’s easy. It sounds good, or at least, it sounds like something that sounds good.

But with all things, the hard part isn’t saying it, the hard part as living it. And Tom has been hammering on about this nonstop for the last forty years, rightly so.

You create excellence by deciding to do so, nothing more. It doesn’t matter if you went to the wrong school, or were born on the wrong side of the tracks, or working the wrong job.

You go into the situation and you go the extra mile. Your decision. You own it. You own the potential downsides as well.

Back when he was a young man, Horst Schulze was a waiter in a smart hotel in Germany.

His mentor, the maître d’, told him something that stuck with him the rest of his life:

Horst took those words to heart, as he rose up the ranks in the hotel business, eventually co-founding The Ritz-Carlton Group, one of the most well known luxury hotel chains in the world.

And for the rest of career, he made sure every one of his thousands of employees learned the same lesson his old maître d’ mentor taught him. It was this “Excellence” ethos that built his incredible company from the ground up.

But why is excellence so powerful? Horst explains, in this wonderful HBR interview:

“Why? Why do it to yourself, to just go to work like a chair works? Why not create excellence? And once you make that decision, it’s all a decision. Once you make a decision, you have to work on it every day and keep repeating the decision. And life becomes much more valuable. It becomes much more fulfilling. It becomes something where you’re using your time to define yourself, and the first one who will see it and will be happy about it is you, yourself.”

Everybody wants excellent results. But if you read Horst’s interview or the books of Tom Peters, you’ll soon understand that excellence is not something “out there”, tomorrow, to aspire to. Excellence starts from within, beginning now.

So decide. Or not. Good luck to you.