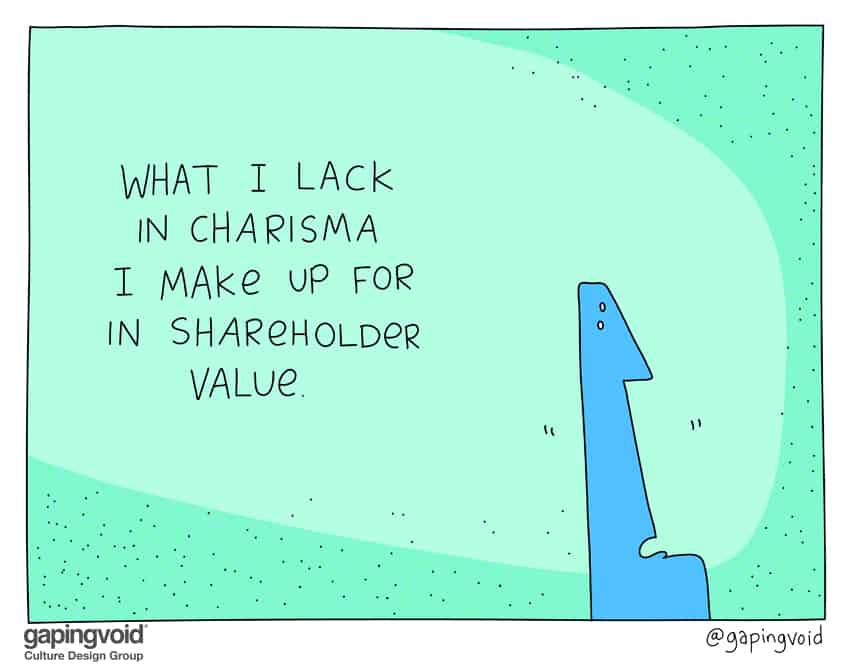 According to these guys, extroverts are more likely to be promoted to CEO than introverts, though introverts will probably do a better job at being CEO.

Simply put, people like charisma, and are drawn to it. For a while, the big story was Nissan with its charismatic CEO,  Carlos Ghosn (who is now a fugitive from the law).  A few years ago it was Apple’s, Steve Jobs. Before that, Henry Ford, or Warren Buffett. Just last week, we wrote about Adam Neumann of WeWork. It’s a story as old as time. And the journalists never seem to tire of telling it.

The grey, anonymous, boring ol’ CEO might have a higher batting average than Mr. Charismatic CEO (folk like Steve Jobs or Buffet being the obvious exception), but the latter comes with a better narrative.

And “Narrative” is what we circle around, like the proverbial campfire. It’s the glue that holds any company, collective, society or civilization together.

Nissan and Carlos Ghosn might be a dumpster fire right now. But for the longest time, they had a great story, and people liked telling it.

The more they liked telling it, the more the value rose.

Until they didn’t. Until the story changed.