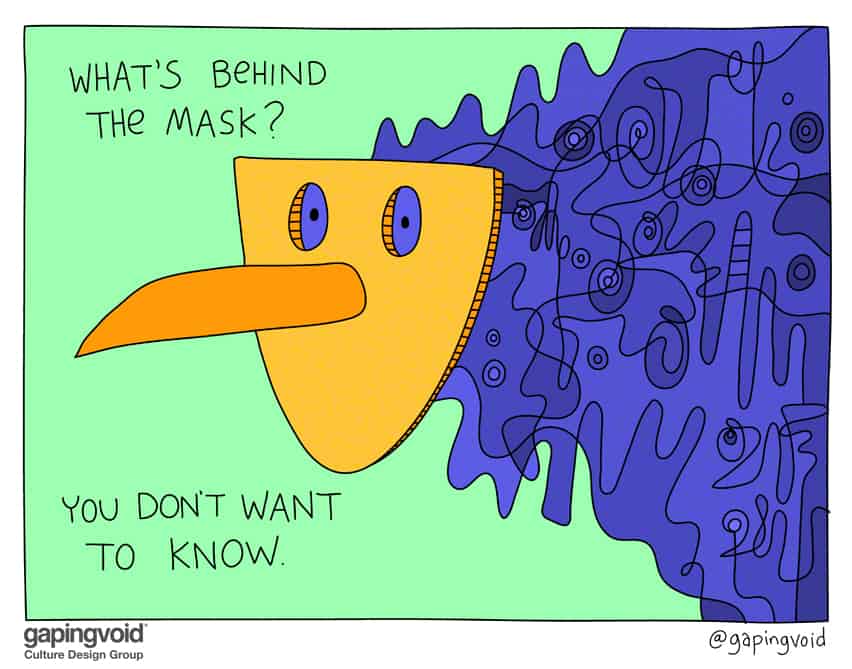 Mark Earls, a very old friend of Gapingvoid, is a consultant and former advertising planner from London, who writes some of the best and most thought-provoking marketing books in the business.

I’ve always been curious about other people’s culture – yes, food and feasting and so on but also the little etiquettes and rituals that shape human interaction and – as I seem to say all too often these days – the Space Between Us. The things people do and the ideas that lie behind the deeds: ideas passed down over many generations over how to behave in each other’s company and why.

Just over a year ago, I was lucky enough to spend a day in the bush of Central North Island New Zealand with an Elder of the local Maori tribe. Many things about that cold but bright day in the mountains have stayed with me, the, walking along the river channels lined with manuka shrub and cooking on stones in the dark and enveloping woods. But perhaps the thing that has the most lasting effect is the Maori culture of meeting and greeting. No, not the warlike Haka challenge nowadays the hallmark of New Zealand’s Rugby team; nor the formal introduction and welcome by the chief or Elders. No, the thing that has stuck with me is what’s called the pepeha: the lengthy personal histories that all those gathered together are bound to give to each other. Each takes turns to introduce themselves using a reasonably well-understood format based on the landscape they come from, the family founders they descend from, the tribe and the sub-tribe, their home marae (community center), their parents and their lineage and finally – finally – they speak of themselves.

How rarely do we really bother to introduce ourselves to each other and give people some background before we get down to business? I know many of my American chums are confused by the Brits’ peculiar fondness for discussing the weather and traffic hold-ups rather than getting on with the agenda.

The Maori approach is different: before they talk turkey, they insist on understanding literally, culturally and genetically where everyone else is coming from. And mentioning themselves last, rather than first.

I was told this the roots of this tradition lie in Maori’s history as hunter-gatherer peoples in a foreign land: it was important to find ways to avoid bloodshed every time one hunting party met another. Whatever the truth of that, my feeling is we’d all do better meetings if we took the time to understand our clients, colleagues, and collaborators as people from a particular place, with a particular history and connected to other people – before we get down to business.

In the end, people are the business; the only business and the toughest business of all. Start with the people.