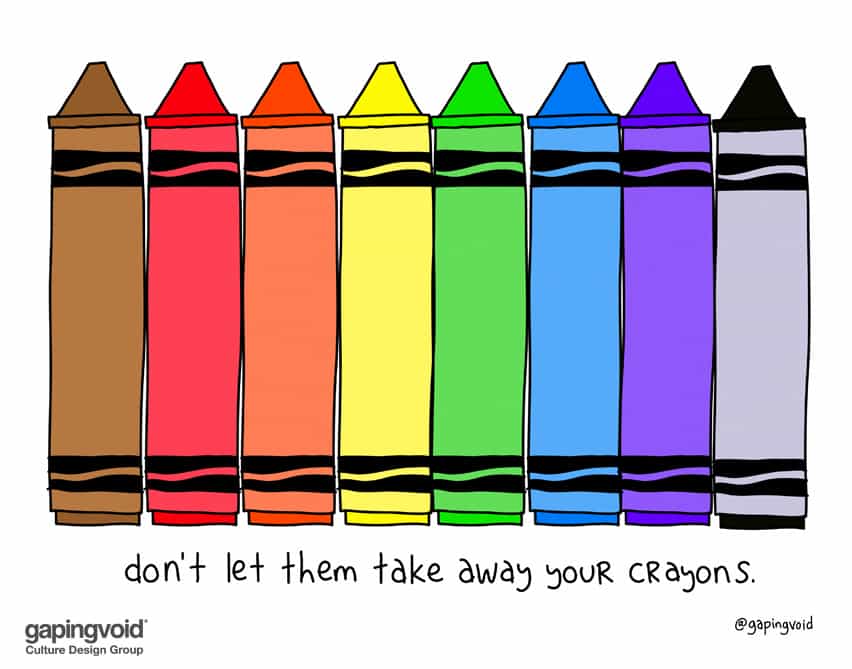 From my 2009 bestseller, “Ignore Everybody”:

Then when you hit puberty they take the crayons away and replace them with books on algebra etc. Being suddenly hit years later with the creative bug is just a wee voice telling you, “I’d like my crayons back, please.”

So you’ve got the itch to do something. Write a screenplay, start a painting, write a book, turn your recipe for fudge brownies into a proper business, whatever. You don’t know where the itch came from, it’s almost like it just arrived on your doorstep, uninvited. Until now you were quite happy holding down a real job, being a regular person…

You don’t know if you’re any good or not, but you’d think you could be. And the idea terrifies you. The problem is, even if you are good, you know nothing about this kind of business. You don’t know any publishers or agents or all these fancy-shmancy kind of folk. You have a friend who’s got a cousin in California who’s into this kind of stuff, but you haven’t talked to your friend for over two years…

Besides, if you write a book, what if you can’t find a publisher? If you write a screenplay, what if you can’t find a producer? And what if the producer turns out to be a crook? You’ve always worked hard your whole life, you’ll be damned if you’ll put all that effort into something if there ain’t no pot of gold at the end of this dumb-ass rainbow…

Heh. That’s not your wee voice asking for the crayons back. That’s your outer voice, your adult voice, your boring & tedious voice trying to find a way to get the wee crayon voice to shut the hell up.

So you have to listen to the wee voice or it will die… taking a big chunk of you along with it.

They’re only crayons. You didn’t fear them in kindergarten, why fear them now?