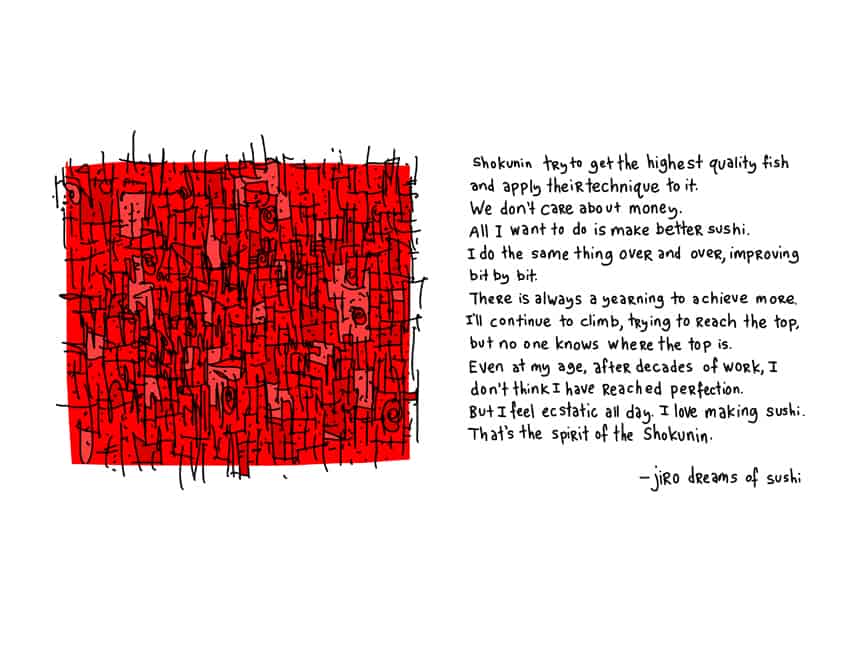 These are words I took verbatim from my favorite scene in my favorite documentary, Jiro Dreams of Sushi.

The film documents the life of Jiro Ono, Japan’s greatest sushi chef- the first sushi chef ever to be awarded three Michelin Stars.

The movie was a huge hit, and I have two thoughts on why this was so:

ONE: It’s a film about Mastery. You may not be a billionaire, you may not be a hot-shot celebrity rock star or famous politician, but you can still be a bad-ass by being a master of something.

Just find something useful, dedicate yourself to it every day, achieve mastery at it, and you’ll be just as happy and satisfied as anyone else.

BITE-SIZE PIECES: Jiro doesn’t have a chain of restaurants and his own TV show, like other famous chefs. He’s just got a small, underground 10-seater in a Tokyo subway station. Not much bigger than a food truck.

So he’s earned his success, not with some big, grandiose plan (“It’s the Uber of Chipotle”), but just one piece of sushi, one bite-size piece at a time.

This Mastery + Bite Size Pieces strategy had a huge impact on me. I spent so many years, wondering what my “big plan” was. But after seeing this film, I realized I don’t need a big plan, I just needed to roll up my sleeve and get to work. It was very liberating.