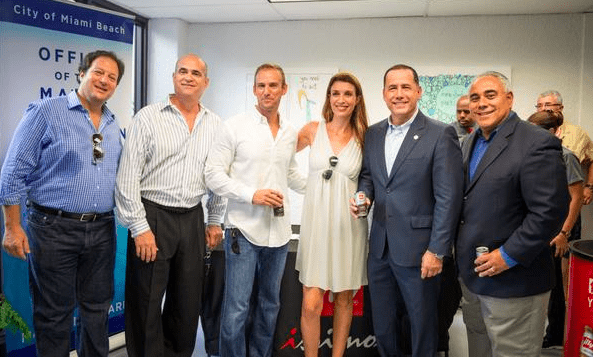 While we count some of the largest companies in the world as clients, our studio is actually based in the seaside hamlet of Miami Beach. One of the nice things about being here in Miami, which is actually like a small town (pop 90,000 with 13 million visitors annually), is that we are privileged to interact with great local institutions like University of Miami and now, the City of Miami Beach.

At first blush, creative solutions for City government, Higher Ed and big business might seem hard to reconcile – I mean, what the heck do they have ​to do with our style of illustration​? What are the ideas that bind these seemingly disparate organizations?

It all comes down to basic human needs, behaviors and tools for leaders. Corporate and public governance are both bound by trust. Employees need to trust leadership is heading in the right direction, secure in a strategy that continues to provide employment and upward mobility. And, leaders need to trust that employees are ​genuine​, hardworking and representing the brand correctly in everything they do. Public or private – it is the same dynamic. And, leaders need tools that communicate what is important – preferably in an immersive, ‘always on’ kind of way.

The City of Miami Beach recently elected an enormously successful businessman in Philip Levine​,​ f​ounder of OnBoard Media, which caters to the cruise industry (Miami being the cruise capital of the world). After selling the business to LVMH in a ‘nice’ exit, Mayor Levine turned h​is attention to local government. Di​satisfied with how his hometown was managed, he ran and was elected Mayor in his first attempt ​(yay!).​

Levine vowed to voters that Miami Beach under his watch would be run like a business, with its citizens considered customers. Unlike the previous administration, the change under Mayor Levine is palpable – previously back-burnered things are getting done around the City.

It is worth mentioning that nearly all of our clients these days are looking for help in instilling ‘entrepreneurial behaviors’ in their organizations, and Mayor Levine is a living example of how to achieve this.

On Tuesday, August 26th, Gapingvoid was chosen by The City of Miami Beach – sponsored under Commissioner Ed Tobin’s office and Dessiree Kane – to install artwork that reinforces the messaging and culture Mayor Levine is modeling.

Pillars like Transparency, Greater Purpose, Making A Difference, Bias Towards Action, Innovation and Audacious Objectives were all represented by Gapingvoid, translating Mayor Levine’s transformational objectives with simple phraseology and graphics. But this messaging, these reminders aren’t just internal-facing for Miami Beach’s public servants, they are external-facing, reminding citizens of both the realities and aspirations of the administration that serves their needs.

That’s where public trust comes in. It’s vitally important. And so Gapingvoid is proud to help convey that in the City of Miami Beach, in this municipality, we’re all in this together. Leaders need tools that communicate what matters. Exactly.