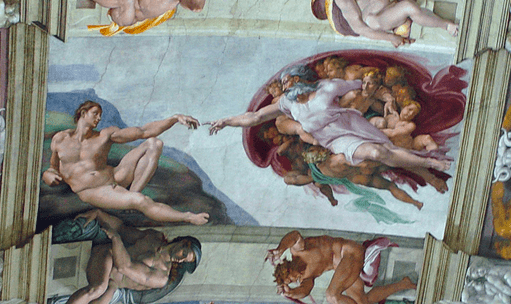 [Motivational Art: the Roman Catholic Church were always the best in the business…]

Art was always the most enduring passion of my life. It’s what defined me since grade school, it’s what I went on to do for a living, it’s what interests me the most intellectually.

First I started with cartooning as a child, then as I got older I got interested in other things: music, literature, poetry, painting, film, design etc. Though I never excelled at most of it, I loved it all, high and low, from Beethoven to the Sex Pistols, from comic books to Tolstoy, from Peanuts to Picasso, from Miles Davis to Frank Lloyd Wright, from The Sopranos to Woody Allen, from Chekov to Bill Hicks.

To be honest, sometimes I feel embarassed by how much I’ve been consumed by it. People with my background weren’t raised to care about this stuff, we were supposed to go into business and have high-powered corporate careers. Art was meant for weirdos and losers.

Yet here I am, in the art business, having more fun and success than I ever would in a more conventional job. What’s more, I’m in the “Motivational Art” business. “Motivational art for smart people”, that’s our schtick.

For the most part, motivational art has a pretty cheesy reputation, and deservedly so. Most of it IS really cheesy. Luckily, gapingvoid and I had the audacity to do it differently. We want to make motivational art that stops people in the tracks and POW! hit them right in the gut, in a way that really matters to them, in a way that ups the ante on their best selves.

Sure, we’re going to get stick for that from the gallery crowd, but I don’t care. You know why?

Because in reality, all art is motivational art.

The good stuff is, anyway. When art affects you in a powerful and meaningful way, it’s motivating you; it’s motivating you to live at a higher level that you were previously. And when it’s really working, you’re life is changed forever, there’s no going back to where you were before.

All my favorite artists had this effect on me over the years- Saul Steinberg, Ralph Steadman, Louis Armstrong, Hogarth, Keith Haring, John Milton, James Joyce, TS Eliot, Lester Young, Barbera Kruger, Willem De Koonig, Edward Gibbon, the now-anonymous builders of the great Cathedrals- they all reached me inside and told my innermost being to raise my game. They elevated me, and they did the same for millions of other people.

And on a good day, on a smaller scale, gapingvoid does the same.

“Motivational Art For Smart People.” That’s what it’s all about, that’s what we do.