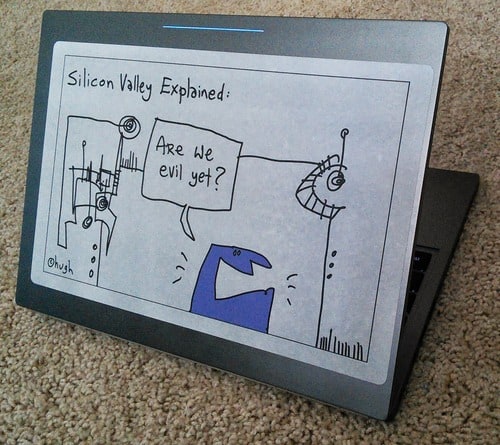 Thanks so much to Vivek Haldar for his fantastic testimonial for our new line of gapingvoid laptop stickers, which I’m quoting in full, below [Photo- Vivek’s laptop.]:

I’ve been a fan of Hugh MacLeod’s work since the early 2000s, back when he was actually making cartoons on the backs of business cards and putting them up on gapingvoid.com. Back when gapingvoid.com looked much simpler.

I remember when he broke out of the card format. When he first used color. I adored how he mixed dark, caustic bitterness with a tinge of humor and hope. (There are times in grad school when one really needs that.)

I took color printouts of his cartoons and stuck them on my cubicle walls. I felt somewhat guilty about him not making anything off that, but then, the real prints were kind of expensive. I bought his books to redeem myself, but they were worth it on their own.

So when he came out with something I had been looking for for a while, a unique decal for my laptop, at a price I didn’t have to think too hard about, I jumped at it. The landscape looks barren when the fifty laptops around the conference room all sport combinations of the same ten stickers.

In nearly a decade, during which time he has given me something cool and new to look at nearly every day, he has made less than a hundred dollars from me. That’s a ridiculously small amount of money given the consistent pleasure I have derived from his work over a long period of time. But that’s emblematic of the new economy.

1. I went and posted Vivek’s story because I wanted to show y’all how yeah, Vivek pretty much nailed the gapingvoid business model.

And pretty much nails how most of content marketing in general works, besides. Textbook.

You have to love them every day, even if they don’t buy from you every day.

Hell, even if it takes years, sometimes…

In an ever-faster-churning world, it’s an easy lesson to forget.

2. The thought occurs to me, that besides giving the customer something cool and unique to visually seperate his computer from everyone else’s,  a good laptop sticker is really a piece of “portable office art”, if used correctly.

A great way to spread a message to, or start a conversation with the outside world, without being too pushy.