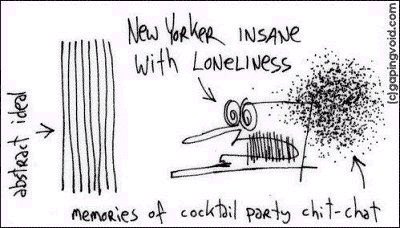 When I set up this blog in 2001, one of the first things I did was write about the New-York-inspired cartoon above, and how an old, random conversation in’s Fanelli’s Bar with a buddy of mine, Mark L. Mann, inspired it:

Told [Mark] my story. Told him about being laid off in Chi­cago. Told him about this new job I got in New York. Told him I only knew I got the job offi­cially before Christ­mas– only about a week pre­viously. Asked him how he was liking New York.

“It’s great,” he said. “Everybody’s insane with lone­li­ness, but that’s OK. After a while you rea­lize that’s part of the edge.“

I was hit with a para­dox. I wan­ted to be in New York, I wan­ted to be “part of the edge”, but I didn’t want to be “insane with lone­li­ness”. Was ­sary in order to have the other? Was it a price worth paying? To this day, I still have no ans­wer.

A cou­ple of months later (July, ’98) I drew this, sit­ting on a bars­tool. Thin­king back to that con­ver­sa­tion with Mark, sud­denly I had a rea­li­za­tion: The sim­ple truth about big cities is that peo­ple don’t go there to give. They go there to take, or at least, to get. If you feel like giving, good for you, somewhere an angel is smi­ling yada yada yada, just don’t expect other peo­ple to follow your exam­ple. And if you’re fee­ling lonely, at least now you now know why. This dra­wing is partly about that.

Mark had been my regular bartender, first in Chicago and then later in New York after we had both moved there around the same time. He’s one of the first people to have seen my “cartoons drawn on the back of the business cards”. Ever. He was right there, across the bar, while I drew the first ones.

Like most people hanging out below, those were young, crazy, unsure days for both of us.

One of the thte things that bonded us together was at the time was that we both lived in constant fear of the same thing: That we would both end up, together or seperately,  one one the people who risk everything and move to New York… and never make it in the end. The people who just get eaten. Devoured. Crushed. Thrown into the incinerator of history.

And what happens to those poor souls? The lucky ones get a bit older, grow up, get a job, find a spouse, move to the suburbs, have some kids. You know, the normal, boring stuff.

The unlucky ones… well, they just end up as characters in the film Mark just directed, “Generation Um”

Yes, Mark made a film. And not just a no-budget online video, but a proper Hollywood movie. With a real cast and crew, with Keanu Reeves playing the lead (and Mark’s alter ego, pretty much).

It’s a film about in the life of  a bunch ofg New York losers. And it ain’t pretty. No. really. It is REALLY bleak, dark and ugly. But it’s also very, very real. Yeah, if you fail in New York, this is kinda what it looks like.

It’s one of the best movies I’ve seen in a long time, and I’m not just saying that because he’s my friend. I was genuinely stunned by how much it hit me, right in the gut.

After the movie ended, I came away with these questions, which don’t necessarily need an answer:

2. I confess, I spent most of the movie waiting for the usual “Hollywood moment” that never happened. You know,  like what they did with “Leaving Las Vegas” in the end i.e. give it a mandatory  Hollywood morality framework so the audience doesn’t feel lost:  The stuff we’re kinda used to, the same way we’re kinda used to airline food: Standard motifs, like the prostitute with a heart of gold. The guy the with the substance-abuse probelem who admits the errors of his ways and finds true love and redemption, before he dies tragically so we can now end the movie, roll the credits, go out and get sushi afterwards and wait for Oscar season to roll around again. You know, the usual stuff. Without these standard motifs to navigate with, how on earth did you manage to sell this to famously risk-overse studios?

3. I had a strange disconnect with the movie at first, because it had that same gritty, downer realism of old John Cassavetes movies. That’s really weird, because those kind of movies never get made any more. I had fogotten what it’s like to sit through downer movies, especially with a bankable stars in it like Kneau Reeves, anyway. Besides liking the script, why did you think Kneau Reevs decided to make the movie?

4. The funny thing is, that as bleak as the film might be, nothing that bad happens to anyone. Nobody gets sick or beaten up or maimed. The bleakness just comes from people steweing in their lives and the choices they made. And we find it utterly horrifying, much more so that seeing actual valiolence on the screen. Bizarre, no?

5. The other disconnect for me was the movie was very hard to figure out at first. Like David’ Lynch’s “Mulhulland Drive”, nothing in it made any sense whatsover until the very last few minutes, then everything made total sense. Did you know that would be a risk?

6. To go from bartender to film director took fifteen years. You still have a lot of friends in the bar & restaurant trade, who knew you way back when. How has your success affected your realtionship with them?

7. What advice would you give to the scores of young New York wannabe filmmakers out there, trying to break in the business? Is living in New York and making movies as feasible idea as it used to be? Was it ever feasible?

Anyway, if you like a smart movie that’s a wee bit different from the usual cinema fare, you might want to give this . It’s now available for rent on iTunes, premiered last week, rolling out to cinemas in the next couple of weeks etc.

Congrats to Mark for making what I think is an increasingly rare bird: an original and compelling New York movie. Rock on.