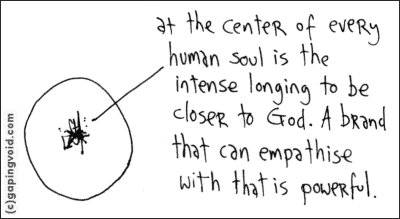 Back in the early blogging days of 2004, I wrote a little online rant called “The Hughtrain Manifesto”, influenced by all the stuff I was reading at the time: Tom Peters, Seth Godin, Mark Earls, The Cluetrain Manifesto etc.

The question I was asking then was, “What comes after advertising?” If this new Internet thingy meant all old-media bets were off, what would become of the Industry that drove 90% of the latter?

My answer (at least to myself) came in Part Four:

“The har­dest part of a CEO’s job is sha­ring his enthu­siasm with his collea­gues, espe­cially when a lot of them are making one-fiftieth of what he is. Selling the com­pany to the gene­ral public is a piece of cake com­pa­red to selling it to the actual peo­ple who work for it. The future of adver­ti­sing is inter­nal.”

In other words, internal communication designed to create real cultural change. Articulating Mark Earls’ “Purpose-Idea”. All that positive disruption for pennies on the dollar… compared to what you get from conventional ad campaigns.

Culture matters. Cultural change is big business, and getting bigger by the day. It’s a huge opportunity for advertising folk; let’s hope some of them actually take it.