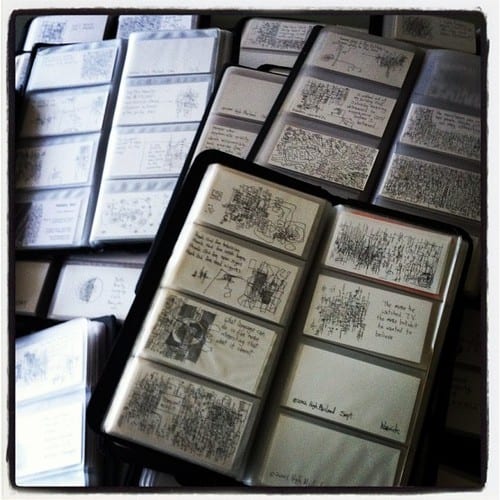 [Note to young, creative types, just leaving college: I wrote this post just for you.],

A British advertising veteran, Linds Redding, a guy not much older than me, gets terminally ill.

Shortly before the poor man dies, he writes a long, heartbreaking, brilliantly savage and honest rant about his thirty years in the advertising business:

So was it worth it?

Well of course not. It turns out it was just advertising. There was no higher calling. No ultimate prize. Just a lot of faded, yellowing newsprint, and old video cassettes in an obsolete format I can’t even play any more even if I was interested. Oh yes, and a lot of framed certificates and little gold statuettes. A shit-load of empty Prozac boxes, wine bottles, a lot of grey hair and a tumor of indeterminate dimensions.

Everything he railed against, I saw with my own eyes during my time in the business. Linds was right on the money. I was more fortunate than he, I managed to get out early; I managed to figure out a way to get paid to do my true calling i.e. cartooning.

But it was tough. I had some pretty bleak, penniless years there for a while. It was nasty. Most people would not have gone through it willingly, I sure as hell didn’t.

Luckily for me, the Internet came along eventually and changed everything yada, yada, yada. But I know a lot of people both inside and outside advertising, some I consider good friends, who weren’t so fortunate (Linds is an extreme example). The world changed, and ate them for breakfast. And now they’re old and frankly, it’s probably too late for them.

But it’s not the being old and being “eaten for breakfast” that’s really heartbreaking. Everybody gets “eaten” sooner or later. That’s just life, we all get old, we all get sick, we all die.

I can’t speak for Linds, I didn’t know the guy, I’m sure he was a lovely fellow who, like the rest of us, did the best he could. I’m so sorry for him and his family.

What is heartbreaking about his story is it reminds me of something that has always haunted and terrified me since I first entered the working world: the idea of getting to the inevitable end of your life, and in spite of all that talent, passion and energy spent working insane hours for decades, you don’t have a meaningful and lasting body of work to be proud of, money or no money.

And that can easily happen, when, early on in the game, you decide to take the easy money. When you let your path be defined by short cuts, short-term needs and the outward assurances of social status.

This is not a rant against the advertising business; it’s a great choice for some folk, I personally got a TERRIFIC education out of it.

Luckily, there’s no law saying that you have to make the aforementioned short-cut decision. There’s another decision you can make.

The question is, will you make that decision? Will you actually follow your bliss?

Only you can answer that.