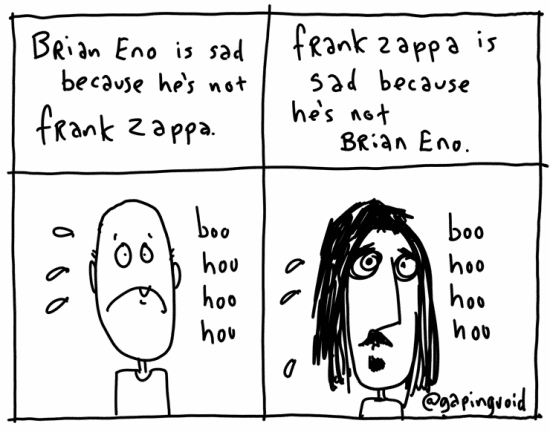 Two of my favorite artist heroes are Brian Eno and Frank Zappa, two musicians who first hit the big time about forty years ago. I was first turned onto them in my late teens.

Both became traditional rock stars around the same time, Eno playing with Roxy Music, Zappa with The Mothers Of Invention.

They could have done was most rock stars do: Make a couple of records, get a couple of hits in the radio, spend the next x-decades touring, living on a tour bus, playing the same songs night after night to adoring fans in towns in Cleveland, Chicago, Des Moines, Little Rock…

And yet they chose not to, after only a couple of years in the limelight. Both were highly intelligent, visionary people, and no much how attractive the sex-drugs-and-rock-n-roll thing can be to young people, the typical rock n’ roll lifestyle was boring and infantile to them.

So they evolved. Their music started getting more and more classical/avante guarde/out-there.

I guess their lesson taught me that, just because you found the standard winning formula, doesn’t mean it has to stay formulaic; that allowing yourself to re-invent, evolve and push out your edges into unknown territory is not just OK, it’s essential.

At least, it is if you want to keep things interesting.

And so I try to incorporate that into my own work… and you can too, even if you’re not an artist or a rock star, even if you have a normal job.

Couldn’t agree more….especially when you say that everyone can learn a big lesson from them 🙂

I appreciate the sentiments you shared here! It is helpful and encouraging to me.

One of the things I think that is important for innovators is to really get comfortable with uncertainty and change. We must always be in motion! Without motion we are stagnant, and grasping to maintain the status quo. It isn’t easy but the challenge is a rewarding one if for no other reason then to learn and grow, and therefore truly live!

Thanks for the lesson,
mhk

I’d be less sad if you had a proof reader 😉
as the omissions and typos in this article almost (almost!) got in the way of the message. 🙁

Yeah, good thing I got the typo police watching my every move 😉