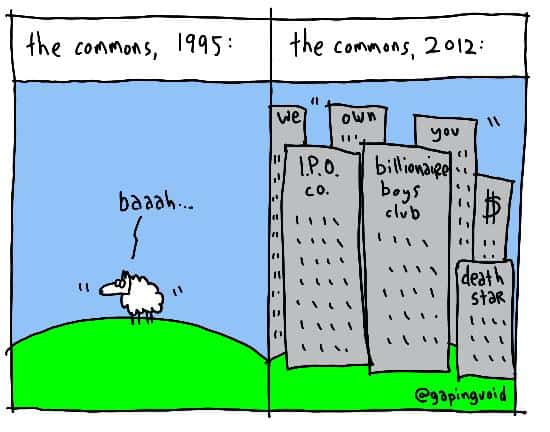 The big Web story last week was about how Instagram just removed its API from Twitter. My old friend, Dave Winer (he is also one of the great web pioneers of the last decade or so) wrote a great post about it. I drew the cartoon above in response to Dave (“Commons” refers to the cultural and natural resources accessible to all members of a society, in this case, the Internet. It’s also where people grazed their sheep in the old days).

Then yesterday, another blogging buddy from the old days, Anil Dash wrote this great blog post, “The Web We Lost”, about how much the web has changed in the last 5-10 years, along similar lines.

In the early days of the social web, there was a broad expectation that regular people might own their own identities by having their own websites, instead of being dependent on a few big sites to host their online identity. In this vision, you would own your own domain name and have complete control over its contents, rather than having a handle tacked on to the end of a huge company’s site. This was a sensible reaction to the realization that big sites rise and fall in popularity, but that regular people need an identity that persists longer than those sites do.

When I think about the era Anil speaks of, I feel like an old hippy talking about how great the ‘sixties were, but he does have a point. The early-blogging seemed a much more fun, edgy, interesting, giving and independent place back then. And then the big boys came along and took over, sucking in all OUR content like a big ol’ industrial turbine. Facebook, Twitter, Instagram etc.

I’m not saying everything was better back then, a lot of things we far harder and slower. But I do miss that indie, “We’re on the verge of something important and wonderful” feeling that permeated the air. It’s not nearly as palpable as it once was. I hope we can one day get that feeling back.

I agree. There was something special back in 1995 when I first started reading you, @edans, Seth Godin, Dave Winer etc.
Now it’s as of there’s too much content, not enough message.

This all just sounds pretty much like people who like to toot their own horn… ” look how long we’ve been doing this… we were blogging and nerding out before everyone else and their mother started doing it and now we’re not that special anymore and since we have no real job skills whatsoever (you know like knowing how to actually create the cables and circuits and chips that make the Internet possible not to mention not-free) we have no idea what to do with ourselves. Lets just blog about it. Yeah! Oh, and we also hate how “commercial” the web has become! If you agree buy some of our swag please.

Charming. Nice to meet you, too 😉

As several of my non-techie friends have become millionaires through social media, I find your comment just kinda wrong.

Hugh,
Just watched a video clip with Chris Anderson and Bre Pettis raving about the promise of 3d printing and then saw your post and hoping it will not follow the same path

this kinda encourages me to keep focusing on producing quality content that actually has meaning and focus. as opposed to creating content for SEO, popularity, or selling stuff.

Don’t listen to Elmas. He/she/it was probably just having a rough afternoon

The New Web is Nasty | The Reformed Broker

[…] Hugh MacLeod at Gaping Void nails this with his new cartoon: […]