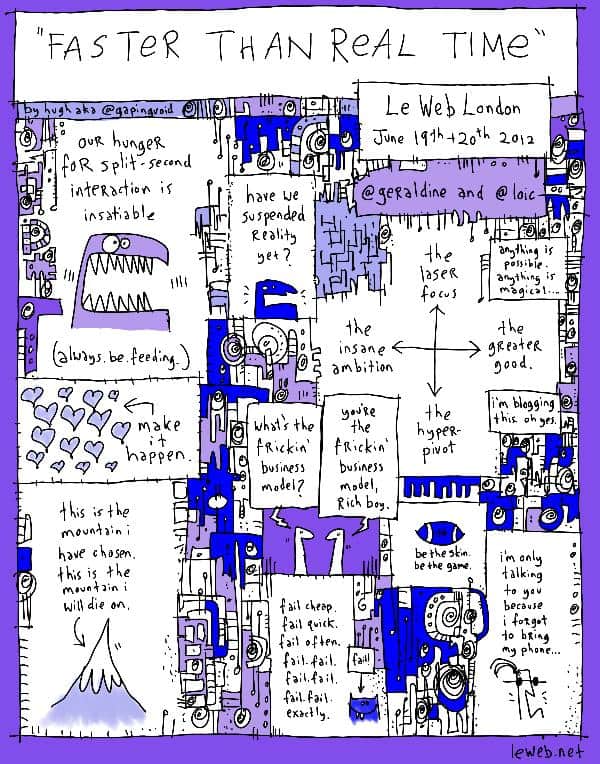 Hot off the press, my old friends  Loic and Geraldine Le Meur asked me to do the theming for the Le Web this year. I’m especially honored as it will include their first London LEWEB which they announced yesterday.

“FASTER THAN REAL TIME”. Le Web London, June 19th-20, the # 1 European tech conference. Join me, Loic and all the gang at http://leweb.net

Having attended the first LEWEB, then called Leblog in 2004, it’s been amazing to see the event grow into Europe’s most important tech conference. It’s one of my favorite conferences (the other one being SXSW), and I’m really excited to be going again. The lineup of speakers is incredible; every year it just gets bigger and bigger.

I’ll be doing a talk this year, and sketching on stage. It’ll be nice to be in London again….

LEWEB has kindly offered a GBP 100 discount to our friends. If you’d like to buy a ticket, just enter GAPINGVOID at checkout to receive the discount.

I haven’t seen your illustrations before, Hugh.

Tech is so important in every part of our life now that conferences take an important role in helping us to understand how things are evolving. Thanks for the discount, it looks like a good conference.

[…] slides are located on slideshare, and see this punchy art from Gaping Void that summarizes the theme.I look forward to your feedback on the themes, we’re actively linking […]