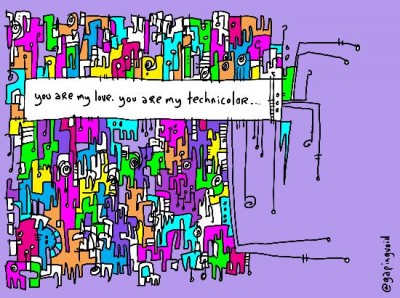 When I attended Ted Global last summer in Edinburgh, one of the people I ejoyed meeting the most was this English-Pakistani guy called Maajid. He did a really good TED talk on how to fight religious extremism, based on his own experience as a reformed member of radical Islamist groups, himself (How radical? Radical enough to have spent time in Egyptian prison for it…).

Fast forward to the present, the other day he emails me out of the blue. Terrific! He wanted to commission a Valentine’s Day gift for his sweetheart. Nice!

So I went with something fun and colorful to brighten up a dark, English February, taking my inspiration, on his suggestion, from Pakistani bus art, which is crazy-amazing stuff.

He’s a lovely, gracious guy, Maajid, and was a pleasure to work with. Go check out the extremism-fighting organisation, Quilliam that he’s head of- interesting stuff.