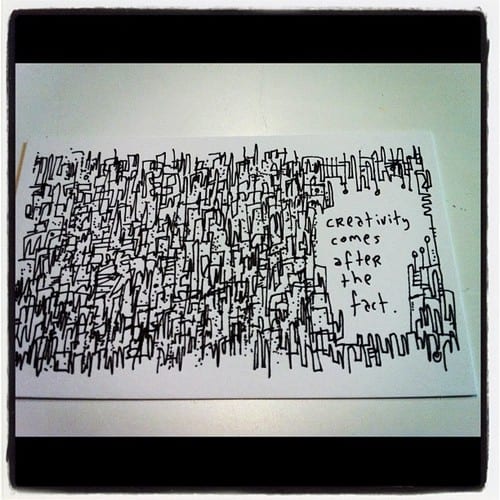 The cartoon above came to me after a Twitter exchange I had with my good friend, the fellow cartoonist-writer-creativity-guru-ninja-whatever, Austin Kleon:

Hugh: If all your songs are songs about writing songs, don’t expect anyone to listen to them.

Austin: The problem with writing about creativity is that it’s often more lucrative than actually being creative.

Hugh: I know. If I had to write about creativity day-in-day-out, I’d kill myself 😀

Both Austin and I have both written books on creativity. Mine did really well so far; I expect Austin’s, when it comes out next month, to become a massive bestseller, if I’m still going to carry on believing that there’s any justice in the world.

i.e. I know my stuff, at least on a good day, and Austin DEFINITELY does.

Yet somehow both he and I still feel as clueless as anyone else, even if we do get paid to write books about on the subject. Why? Because, actually:

Creativity comes after the fact.

Kids come up to me and ask me all the time…

Kid: How do I get a “creative” career-thing going like yours?

Hugh: Make something. Grab a piece of paper and a pen or whatever and get cracking…

Kid: What if it isn’t any good?

Kid: Ok, what if it’s pretty good, but it’s still going to take me another twenty or thirty years before the world understands it?

At that point, they’re already sick of asking me any more questions and so they move on, unhappy. Oh well…

The thing is, people think there’s some set of ideal conditions out there, floating independently in space, that somehow have be met, some magic fairy boxes that need to be ticked off, before you can go and “be creative”, whatever that means.

Actually, no. The way to be creative is to make stuff. You wake up in the morning, have some breakfast, hit the work bench and get on it with it.

Or not. Maybe you’d rather just hang out, light a joint and watch Star Trek reruns. Your call.

You can’t plan for creativity. You can only plan to do the work.

Whether it ends up being “creative” or not, is decided later. Long after you’ve finished the thing and moved on to something else.

That’s what I mean by it coming “after the fact.”

And so there we are.