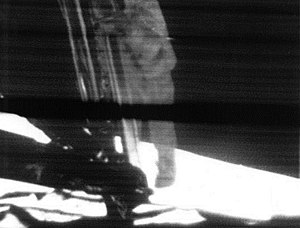 [This is a cross-post from my friend, the business coach and former VC, Jerry Colonna. Originally posted on his blog here.]

I’m pretty sure it was a Philco. I know I was five and half.

It’d been a typically hot summer day where my best friend Marcus had spent much of it carving our initials in the hot, soft asphalt of East 26th street and floating wooden Popsicle sticks at the gutter river rushing out of the open hydrant. July 20, 1969.

My father calls out from the front window of our ground level apartment. ”Jerry!” he shouts, “Come inside.” The tone means either I’ve done something wrong or something important is going on. I hope for the latter.

I come  inside and find my parents, my brothers, and my sister gathered around the Philco (or was it a Dumont?). Neil Armstrong is  just stepping down the ladder of lunar landing module.

I thought of that moment years later when, after deciding to go into work a little late that day, I watched the Challenger first lift off and then explode.

And I thought of it again a few weeks ago as Hugh MacLeod talked about going to watch the last Shuttle take off. When I saw his drawing, his take on what this all meant, I understood a little more about my own experience.

Watching that one small step on the static-ky, shaky black and white TV, with the tinfoil on the antenna to get a slightly better reception, I realized I had been inspired in small ways to live a life that would always push against the limits of my own fears.

Hugh’s “Incredible Times” drawing implicitly challenges me to see more clearly, to articulate more dearly, those folks who inspire me to see the incredible, the unbelievable. Fortunately, I can see it in the everyday.

I see it, for example, in the client who discovers a tumor that needs to be removed from her liver or the friend who’s tumor is in her breast. I see it in the client who–despite the gnawing, aching fear of never being able to be good enough to please a parent–still goes in every day making, as I am wont to say, “incremental progress that is directionally correct.”

We do ourselves a disservice when we look only to the extraordinary for affirmation of the incredible. We set ourselves up, then, to see that our struggles with the pathology of every day are somehow less then. And, of course, that then reinforces our own gnawing aching fears that we are never enough.

It helps to see the incredible inspiration in the man, the artist, whose demons were so ferocious that his only solace was to drink, smoke, and sleep in a kind of hazy denial of life. When that man wakes (albeit with the shock of a fearsome medical diagnosis) and begins the painful process of reclaiming his body, and through that act reclaims his souls…well, when that happens, boy howdy, we do live in incredible times.

So Hugh is right: there is work to be done. But I think the work is not getting people to romanticize our heroes but to see the incredible in the simple act of getting along, of growing up, of becoming more and more wholly, utterly, ourselves.

When Siddhartha woke up and became the Buddha, the awakened one, he didn’t wake to see the triumphant earthly gods and goddesses. He awoke to the utterly breathtaking beauty of the everyday person facing the truth of the pain and fear of life; facing that truth and choosing to move ahead, regardless. That feels like one heck of a small step.