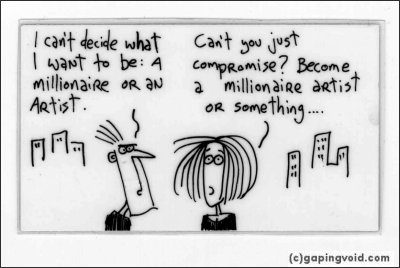 [UPDATE: Because I want peo­ple to see it, I’m kee­ping this as a pla­cehol­der at the top of the gaping­void home­page for a while. Scroll down to see newer stuff etc.]

My manifesto, “How To Be Creative”, is still the most downloaded manifesto on ChangeThis.com. The editors there recently told me that at last count, it’s been downloaded 4.5 million times.

If you want the more deluxe version, HTBC eventually was reworked, extended and turned into a hardback book, “Ignore Everybody”, which went on to become a Wall St. Journal Bestseller.

Thanks to everybody who took the time to read it over the years. It means a lot, Seriously.

[PS: I also have a second manifesto on ChangeThis, called “The Hughtrain”. Check it out….]