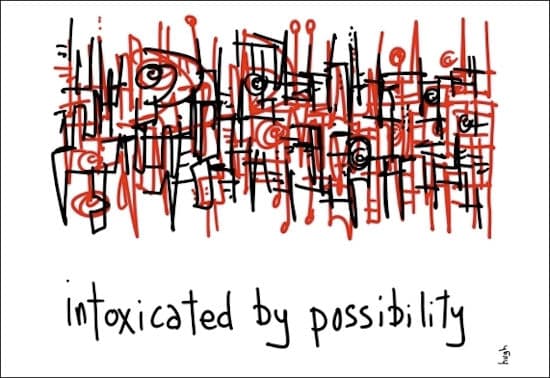 I remember the day, back in the early 1990s, when I first came across the great business writer, Tom Peters. Most TV shows are forgotten within hours of watching, but this one still stays with me, two decades later.

Tom was doing a PBS program on the Mittelstand, those amazingly plucky, medium-sized German companies that somehow manage to compete successfully on a global level, in spite of their relatively small size.

Tom was interviewing Horst Brandstätter, the owner and CEO of Playmobil, the famous German toy company.

And this is the part I REALLY remember- to paraphrase:

TOM: Hmmm… These Playmobil toys of yours… they do amazingly well, all over the world. So what’s their secret? What do they do that’s so interesting?

BOOM! A moment of clarity. One that sticks with me, like I said, twenty years later.

When I was doing that cartoon work for Intel last month– “A processor is an expression of human potential”, I was still thinking about what Horst had said, all those years ago. Very much so.

What Horst said is true, whether you’re running a small mom n’ pop cheese emporium in Greenwich Village, or a multibillion titan like Intel: To borrow heavily from Kathy Sierra, the product doesn’t get to be kick-ass until the user kicks ass first.

Don’t talk about yourself. Talk about something else. Aim for something higher. Talk about the user. Remember Playmobil. Never forget the child playing with it.

I know I like to yack on endlessly about “It’s all about human potential.” I know its cliche, but then again, I’m not wrong, either. This is why we exist. To find out.