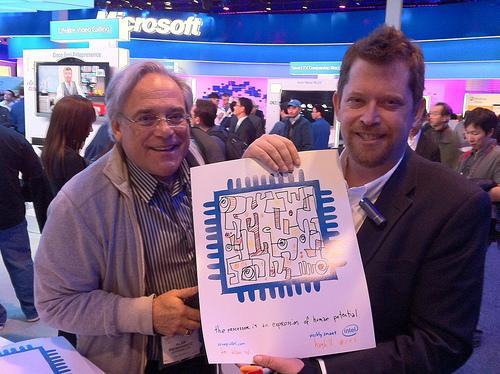 [Alan Weinkranz– an old Texas connection of mine- and myself at CES last Saturday etc.]

“Intel Processors are smaller than a postage stamp. Intel has 80,000 employees. How do you fit so many people into an object so tiny? That’s what amazes me.”

I am writing this from home in Miami Beach, a day after returning from the Consumer Electronic Show in Vegas. Here are some notes:

1. CES is big. Very, very big. We’re talking roughly TEN times the size of SXSW Interactive. To give you a sense of just how big CES is, my friend, Robert Scoble walked through the entire CES venue with a video camera running the who time. It took him 45 minutes just to get from one end to the other [I make a brief cameo appearance about 16’30” into it].

2. Alan Weinkranz also made videos at CES. Here’s one he did of me. Excuse the sound quality etc:

3. My time at CES was spent pretty much exclusively at the Intel stand, signing prints. It was great. Just… great. I turned up in Vegas with over 500 of them. By day three we had run out. We took a lot of pictures- a couple of hundred of them. You can see them on Flickr here.

4. Intel was at CES, of course, to introduce their new 2nd Generation Intel® Core™ processor. It’s smaller than a postage stamp. Intel has 80,000 employees. How do you fit so many people into an object so tiny? That’s what amazes me. That’s what I kept thinking about the whole time I was there. We live in incredible times…

5. Yes, I’m exhausted. Yes, I’m  a wreck. Yes, it was worth it. Intel was an fabulous client. A special thanks to Marcia Hansen for getting me involved.

You losing some of the old weight there, huh Hugh?

Wow Hugh, you are looking good these days. What a transformation. This is coming from a woman who loves the company of women, not that it matters, lol. Keep doing what you’re doing, it is so good for you.

Hugh, thanks for including my video on your site. I look forward to seeing you again at SXSW. Your work inspires!

Al this technology, and there you are are with a sharpie. I love that. Thanks for the inspiration!

[…] We printed these up as fine art prints. Then I hand-signed them at the Intel stand at the 2001 CES (Consumer Electronics Show) in Las Vegas. You can seethe photos here on Flickr. […]