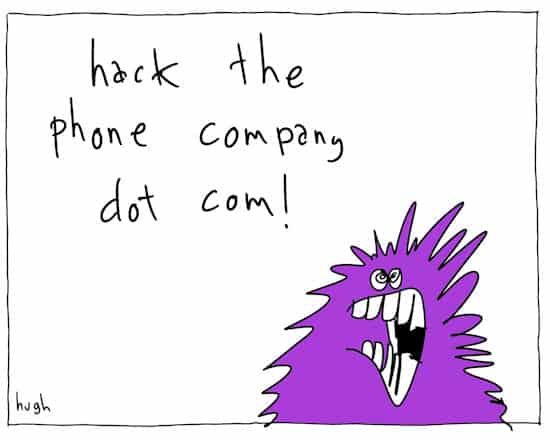 AT&T’s monopoly was broken apart in 1984, when the company was split into seven parts.

But for iPhone users, AT&T is pretty much a monopoly again, with their exclusive deal with Apple.

AT&T, Verizon, Orange, T-Mobile, Vodaphone, it really doesn’t matter. They’re generally expensive, they’re restrictive, often the service sucks, so you’re always trying to bypass what they have on offer- trying to hack your way around it.

Line2 with their VoIP service, is trying to do the same.

Click on the link (or click here) and see what we’ve done. There’s just a fun cartoon right now-

It’s a start. We’re hoping to make this the start of something bigger. Much bigger. We want to “hack” the phone company. So do you. So does everybody else.

[PS: Here’s a link to what NYT Tech writer, David Pogue, has to say about Line2.]