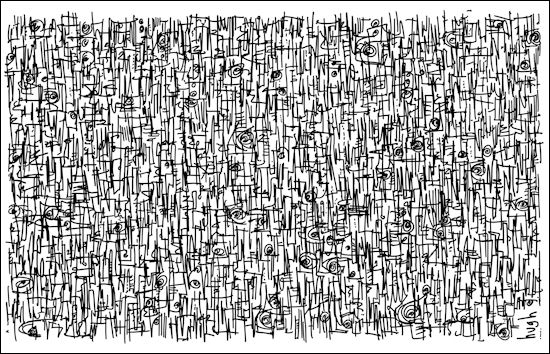 I remember (and it wasn’t that long ago) when Masahble was just a small blog, run by Pete Cashmore out of his bedroom in Aberdeen, Scotland, while he was still living with parents. Now Mashable’s “bigger than Elvis”- the rise was meteroic- faster than Huffington Post’s or Techcrunch’s, even.

I hung out with Pete at a conference in Amsterdam a year and a half ago. Nice guy. Polite, unpretentious, driven and sharp as a tack.

Mashable, as you probably know, covers everything to do with new media and Web 2.0. Nobody owns that space as firmly as they do. And when I think of new media and Web 2.0, I think of “Small Pieces, Loosely Joined”, as David Weinberger would say. Hmmm…. that’s pretty much how I draw my “all-over” abstracts. A cloud of tiny elements, all fitting together cohesively. So this gave me an opportunity to do something with the Daily Bizcards that I haven’t done before- design a totally abstract, non-representational one. Fun!

[Commission a drawing from Hugh]

[Adam, we’ll be in touch soon via [email protected] to collect your details for the back of the card, so we can print & ship a free box of 100 to you etc. Thanks!]