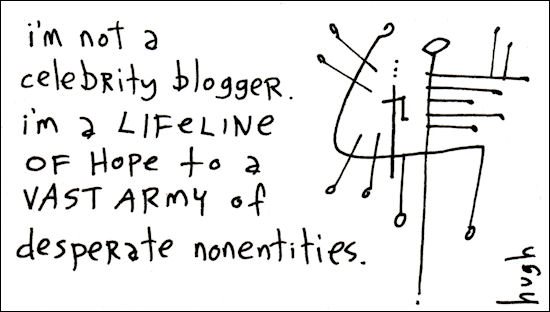 Scoble was the pretty much the first celebrity blogger to be working at Microsoft. I thought what he did for the company then was tremendous- he really tried to shake the company culture up for the better, and he often succeeded. He now works for Rackspace, the big hosting company. There he pretty much does the same thing that he always has- talk to geeks and entrepreneurs, and try to be the first one on the block to get his hands on the latest bright & shiny object. Oh, and try to shake the company culture up while he’s at it.

I don’t think this cartoon really applies to Robert, but he has a sense of humor and I think he’ll get the joke. I can certainly see him handing it out at tech conferences, just for a giggle…

[Commission a “Cube Grenade” from Hugh]

[Robert, we’ll be in touch soon via [email protected] to collect your details for the back of the card, so we can print & ship a free box of 100 to you etc. Thanks!]