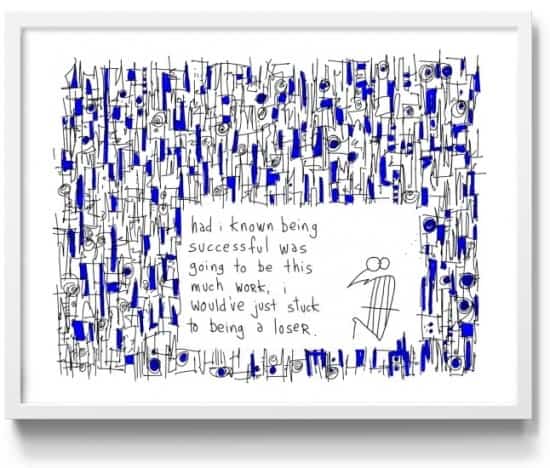 [“Successful”, which I sent out in the newsletter a few weeks ago. You can buy the print here etc.]

This weekend I sent the final, edited draft of “Evil Plans” off to my publisher. It  comes out in April.

A few hours later, a couple of people were asking me, “Why aren’t you celebrating? I’d be hitting the bars right now…”

Heh. Finishing the book is really not that big a deal. All it marks is the end of a massive, fairly tedious, weeks-long editing and “polishing” session, LONG AFTER you’re done with the meaty, creative, fun part.

To me, there are four really big moments in getting a book out. Finishing the book isn’t one of them:

1. Coming up with an idea for the book. That’s big. A big EUREKA moment that cuts through all the clutter like a sharp blade. The big initial flash of inspiration that gets the ball rolling. That’s all very exciting, but you never know how long you can keep the momentum going. It all might die out after a couple of days, it might last until you get the thing published and it hits The New York Times Bestseller list. You never know.

2. Landing the publishing deal. That’s what every aspiring writer dreams of. It’s a HUGE moment, especially the first time, though the euphoria doesn’t last long. Once you’ve signed the contract and cashed the advance check, within nanoseconds all that excitement is suddenly replaced with the heavy weight of “Damn, now I have write the bloody thing.” And the better job you’ve done convincing the publisher what a rockstar you are, the heavier the weight is.

3. Releasing the book. Seeing it hit the bookshelves. All those months and months of work, put to the test. That’s quite thrilling, especially the first time, though if your book bombs (and if it bombs, it bombs quickly), that can be devastating.

But the biggest moment for me, happens about halfway between Numbers 2 and 3:

That’s the best time to hit the bars, if you ask me.