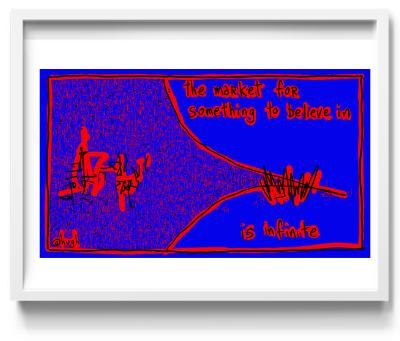 [UPDATE: My email service, Mailchimp, was down last night for a couple of hours, Aaaargh. But it’s up and working now. So if you had any problem signing up last night, please try again etc.]

The first print I published via gapingvoid was The Bluetrain, pictured above. It debuted in early 2009 at around the $175 mark.

Meanwhile, two weeks ago we launched “Hugh’s Daily Cartoon”, where I email my subscribers a new cartoon every weekday.

So far it’s been a huge success, but now that it seems to have a bit of momentum behind it, I naturally want to keep it going.

So I’ve decided to experiment: I’m going to give away, for free, one copy of my most expensive (and now-very-rare print) i.e. one of the Bluetrains.

Who to? Some random person who signs up to “Hugh’s Daily Cartoon” any time between now and  12.01am, Saturday morning, the 30th of January. Just over 24 hours from now Monday morning, 1st February (We extended the deadline 48 hours, due to the fact that we had server issues with our email server).

Feel free to tell your friends, Thanks.

P.S. For those of you who have already subscribed, no worries if you’re missing out. I’ll figure out something to do with y’all as well, sooner than later. One step at a time, Thanks Again.