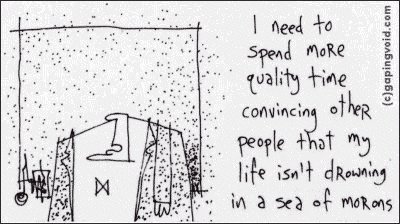 “My boss won’t let me” is a terrible excuse for not getting on with building your own personal global microbrand, within the confines of your job. A good boss wants her employees to have their own sense of sovereignty and destiny. Why on Earth would you tolerate a boss that didn’t?

I once had a boss who didn’t like the fact that I had a blog. Especially when I blogged about stuff that was relative to our industry. Yeah, “Our brand must speak with one voice” was his idea. Yes. I know.

Actually, the reality was, HE wanted to be “The One Voice”. He wanted all the credit, and all the rewards. He didn’t mind me putting words into his mouth- stuff I had written- so long as the outside world gave him all the credit. But he didn’t want me in any other role, other than subservient, nowheresville wage slave. He fought tooth and nail to keep me from ever becoming a rainmaker inside the company, something he wanted all for himself.

I left the job a few months later. I was glad to leave, frankly.

The story actually has a happy ending. To deflect some of the heat the boss was currently giving me, I decided to stop blogging about our industry for a while. I decided instead to write about a different subject altogether.

Not sure what to write about, I just dug into my past experiences and started writing a series of blog posts on the subject of creativity, from what I had learned from all those years of cartooning. This series ended up being read online by a lot of people, and then went on to become my first book, “IGNORE EVERYBODY”, which went on to become a business bestseller.

Last time  I checked, my former boss’ situation hasn’t changed much. He’s still hacking away in buzzword-infested mediocrity, his “speak with one voice” shtick still being completely disregarded by anyone who matters in the industry.