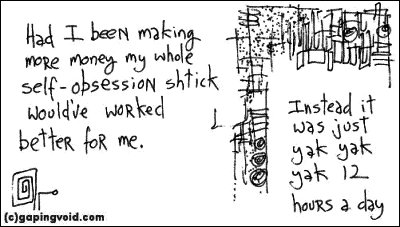 Simon Thornhill is a good friend of mine. He and his lovely wife own The Troubadour in London, the legendary restaurant and nightclub. Jimi Hendrix and Bob Dylan played there, back when they were still unknown. The Thornhills bought the place from the previous owners a few years ago.

Before that, Simon was an officer in The Scots Guards, a highly respected Scottish regiment in the British Army. He’s tough as nails, but a bit of a hippie, too. If you ever visit Earl’s Court, look him up. He’s terrific company.

I don’t know what we were were talking about that night in The Shackleton Room, but somehow the conversation got on to the subject of young Army officers. Some of the kids I went to high school in Edinburgh with ended up joining Regiments straight after finishing their exams, so Simon’s previous life wasn’t a world completely unknown to me. These kids sign up at age seventeen or eighteen, take their two-year training at Sandhurst, and the next thing you know, they’re in the field, armed to the teeth, and giving orders to experienced Sargeants and Corporals twice their age.

I don’t know about you, but I would find that REALLY intimidating. Those young kids must have cojones, I’ll tell you that. I was telling Simon how terrifying I thought it it must be, to be a kid barely out of school, with all the men  FAR more experienced than you under your command, holding you in the traditional squaddies’ contempt reserved for all new, young officers.

“Yes,  that certainly happens,” said Simon. “But then you finally have what they call in the Army, ‘The Moment’. The Moment when you stop trying to be your men’s new best friend, and actually start to lead them. That’s when you REALLY become an officer- not before, when you receive your commission.

“That happened to me when we were on a night exercise. I had only received my commission a few months previously. Things were going terribly wrong, nobody was doing their jobs. Everything was in shambles. Finally I had my ‘Moment’. I just pulled my finger out, and firmly said to the men, ‘I’m in command, you’re not, you will do as I say or I will have you all up on charges, Boys. Now fucking go do your jobs.’ Somehow they knew I wasn’t joking.

“And so they went off and obeyed their orders, without any fuss. A few of them were easily ten or fifteen years older than me… The thing is, they might not think much of the young kid giving them orders at first, but at the same time, soldiers do want to be led.”

I remember mine. I didn’t think too much about it at the time, but over the years I realized just how key it ended up being.

I was a young freelance advertising creative, living in London, meeting a friend for a drink at my regular Soho watering hole, The Coach & Horses.

The bar was crowded and noisy that eve­ning. The bar­maid was a young, pretty Chi­nese lass, who’d only been in the country a short while, who spoke pretty good English, but not great.

I asked the bar­maid for a glass of wine for my friend, and for me, a gin & tonic with FOUR sli­ces of lime. I even held up four fin­gers to help make it clear to her.

So the poor bar­maid ended up bringing me back five drinks– my friend’s glass of wine, with FOUR gin & tonics, each with a SINGLE slice of lime. Oops. We’re tal­king a round that I sup­pose easily excee­ded thirty or forty dollars.

A sim­ple misun­ders­tan­ding, I guess, plus like I said, her English wasn’t very good. I told the bar­maid about the mix-up. “No, I asked for a SINGLE gin & tonic with FOUR sli­ces of lime” etc.

Up until that moment, like any young pub drin­ker, I pro­bably would then have just asked the bar­maid to take the sur­plus three drinks away, and add more lime sli­ces to the remai­ning gin. Easy. But I didn’t.

Ins­tead, I asked her, “Will this mis­take be coming out of your wages?”

“Yes,” she replied. I already knew enough about the bar’s owner to know that she wasn’t lying.

The thing is, unlike here in the US, the people working in Lon­don pubs don’t work for tips, mainly because nobody really tips there. You might get five or ten dollars a night if you’re lucky. They get paid by the hour, usually mini­mum wage, in one of the most expen­sive cities in the world. Hence Lon­don bar­ten­ders tend to be really, really poor. The mis­take the bar­maid made would be, for her, extre­mely expen­sive. Two-three hours’ wages or so, maybe even more.

“Never mind,” I said. “Just put three more limes in one of the glas­ses, and I’ll pay for the other three gins as well.” Which I did.

Then it was just a mat­ter of fin­ding three ran­dom peo­ple in the bar who were not above accep­ting free gin & tonics from a total stran­ger with an Ame­ri­can accent. This being The Coach & Hor­ses, that took all of twenty seconds. “Cheers, Mate!”

A year or two before that, I would’ve just pro­bably allo­wed the young bar­maid to take the hit. “You made the mis­take, not me, not my pro­blem” etc.

London was being kind to me at the time; life was good. Whereas this young Chinese girl was living thousands of miles away from her family, and pro­bably doing so very close to the poverty line. So I chose to take the hit ins­tead of her. I know I didn’t have to, I was per­fectly within my rights, but…

I didn’t want to be that kind of per­son any­more. I really didn’t. So that was my “Moment”.

And every enterprise I’ve ever star­ted or been invol­ved with, had its Moment as well. That moment where you finally decide not to cut cor­ners, not to make excu­ses, even if you can get away with it. Even if 99% of other busi­nes­ses wouldn’t have bothered.

These moments are gold dust, they really are.

Has your business had its “Moment” yet? If not, what can you do to make it happen sooner? Serious question.

[Update: Molly made a lovely point in the comments:]