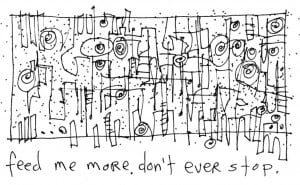 I got this story from Derek Sivers, about a musician who bought a quarter-page ad in a big magazine. The magazine had a circulation of a million readers:

The musician had pressed up 10,000 copies of his CD in anticipation of 10,000 orders that were sure to come through that week.

The magazine issue came out, and… Nothing. He bought an issue. There was his ad. But the orders were not coming in! Was something wrong? No. He tested it. Everything was working.

Over the next few weeks he received four orders. Total CDs sold: FOUR.

My friend telling the story ends it with the best line:

“He forgot there was a number lower than one percent.”

Heh. If one percent of the people who read my blog bought my prints, I’d be richer than the Andy Warhol Foundation by now…