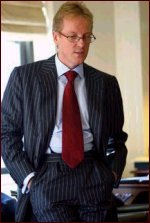 EnglisCut.com was a blog I started with a Savile Row tailor, Thomas Mahon, back in January 2005. The enterprise proved tremendously successful- enough that the story has been retold many times in magazines, blogs, bestselling books and national media. Three years ago in London I gave a talk all about it- I thought it was now worth re-publishing the accompanying blog post I wrote at the time. Enjoy:

I’m speaking today at the “Social Network Tools & Their Business Application” conference in London. The title of my talk is: “Case Study: Using Blogs to Create a Global Micro-Business”. I’ll be talking about English Cut, and how it transformed Thomas’ tailoring business and educated his customers.
The story of how Thomas, myself and later, New York PR maven Dave Parmet started working together was wonderfully re-told in Naked Conversations:

MacLeod says he “started filling Mahon’s head with Cluetrain and blogging stuff,” and slowly Mahon got interested. “We started thinking that if Mahon could talk about tailoring on a blog about the same way that Seth Godin talks about marketing, then the people who care will see it. Mahon wouldn’t try to sell suits on the blog. Instead, he would show his knowledge and love of the craft. He would explain the labor, and materials involved and why the cost of each suit was justified.” The idea was that the people who cared either about suits or how a master craftsmen creates them would find their way to the site.

My father remarked to me the other day, “I bet you had no idea in the beginning that the blog would work as well as it did, eh?”
True, I had no idea. But looking back, we had a few things going for us.

1. A great product. Thomas is one of the best tailors in the world. His suits REALLY ARE that good. If we were just selling commodified drek, I doubt if anyone would’ve paid much attention.
2. A unique story. When he started, Thomas was the only Savile Row tailor writing a blog, and this gave him a unique voice in the blogosphere. This fuelled the interest. Had masses of tailors already been blogging, it would’ve been much harder for his own unique “idea-virus” to spread. The first-mover advantage rule still applies.
3. Passion & Authority. Thomas has both in spades. That’s what kept people coming back. That’s what built up trust. That’s what turned his readers into customers. Which is why “Share what you love” is the best advice there is.
4. Continuity. He kept at it. He didn’t expect the blog to transform his fortunes overnight. As I’m fond of saying, “Blogs don’t write themselves”. Based on our experience, if you want blogs to transform your business, I’d say give yourself at least a year.
5. Focus. It was always about the suits. It was never about what he had for breakfast, Technorati rank or frothy gossip about other bloggers.
6. Thomas spoke in his own voice. Thomas is a straightforward, affable fellow, and the voice on the blog is the same as the voice you meet in real life. He never tried to misrepresent himself on his blog, nor try to create some over-glamorized image of his profession. He just told it like it is. And people responded well to that. As he once put it, “We’re so lucky we don’t have to create the brand out of thin air. We just tell the truth and the brand builds itself.”
7. Sovereignty. The only people we had to please were the two of us. No bosses or outside investors to keep happy. Bosses and investors like guarantees, but there aren’t any.
8. We were both broke when we started. Had we had masses of money at the beginning, we would have had a lot more options on how to get the word out. In all likelihood, these options would have been a lot more expensive and not nearly as effective. Sometimes lack of capital is a definite advantage.

A blog is a great way to build one’s own personal “global microbrand”. As the Job-For-Life no longer exists, as the value of the social “position” erodes and the value of the “project” takes its place, personal brand development becomes far more important to one’s career. Blogs are a good place to start.
Hey, if a Savile Row tailor can do it, what’s your excuse?

(This post is part of an ongoing series with Brian Solis “17 Cartoons That Will Change Your Business,” inspired by Brian’s book, “What’s The Future …