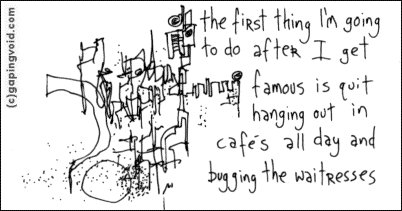 1. Ten Thousand Hours.
Ten Thousand is a number that has been in vogue among the online intelligencia lately, thanks to “Outliers”, the bestselling book by The New Yorker writer, Malcolm Gladwell.
Gladwell didn’t invent the idea, but he popularized “The Ten Thousand Hours Rule” [I believe it first came out of a study from Florida State University yada yada…].
In short, evidence suggests that if you want to be really good at something, really successful at something, you need to put about ten thousand hours of work into it, before your efforts bear real fruit. This seems to be true whether we’re talking about computers (He cites Bill Gates being one of the first high school kids EVER to have put in ten thousand hours of computer time before going to college), or making art, fixing cars, laying tile, or getting a black belt in Karate.
Gladwell certainly made a good case for it, and from my own personal experience, ten thousand hours sounds about right. I actually came across the Ten Thousand Hour Rule before Gladwell’s book came out, via my buddy, Stowe Boyd, who wrote a great blog post about it [using me as a case study, *cough*] a few years ago. But I digress…
2. Ten Thousand People.
Ten Thousand is a number that has special meaning to me, as well:
The first few years of this century were tough ones for me. My career in advertising pretty much tanked around the same time as the dotcom crash, and I found myself unemployed, broke, living in the boonies, scraping a meagre living writing freelance brochure copy. Then 9-11 came along and made it even worse. Not fun or nice.
Up until that point, I had spent my entire working career “chasing gigs”. Whether we’re talking full-time salaried positions, or three-day freelance opportunities, I had spent well over a decade chasing that ever-elusive island of security in a swelling ocean of advertising-industry chaos. And these gigs would never last, they would always end eventually, for whatever reason. Recessions, layoffs, downsizing, incompetence on my part, incompetence on the boss’ part, whatever. And usually the timing was bad, of course it was.
Chase, chase, chase…. And I was sick of it. Really, REALLY sick of it. Over a decade of working my butt off, and those islands of security were no less elusive than before. And I wasn’t as young as I used to be. The hamster wheel was starting to do me in.
Then, in these darkest of days, I had a sudden flash of life-changing insight. Like I told my fellow burnout-advertising drinking buddy that evening, as we commiserated at the bar about our sad lot in life:

“I don’t want to be chasing gigs anymore.”
“What do you want, then?” asked my buddy.
“I just want ten thousand people giving me money every year.”
“Where are you going to find these people?” he asked.
“The Internet,” I replied.
“What do you plan on doing there?”
“I think I’ll start by publishing my cartoons online… on a blog.”
“What’s a ‘blog’?”

The rest, as they say, is history…
There was nothing magical about the ten thousand number. I just reckoned that, as a cartoonist, if I was making t-shirts, books, whatever- and ten thousand people were buying product every year, with me making a few bucks profit off each unit, well, it wouldn’t make me a billionaire, but at least I’d be able to feed myself.
Also, ten thousand people supporting me seemed like a good way of spreading my bets economically. If one person drops out, and all you lose is a t-shirt sale, with 9,999 other people still on board you can easily recover. But in the world of chasing advertising gigs, if the one person you lose happens to be your jackass boss, you’re dead meat.
Then a wee while ago I came across the great “One Thousand True Fans” blog post. A similar idea to my own, except his magic number was one-tenth the size of mine. It doesn’t matter. It all depends on what you’re selling. The famous English tailor, Thomas Mahon, has his magic number set at one hundred, because that’s basically how many handmade suits he is physically capable of making in a twelve month period. Good thing his suits are very expensive- One hundred “True Fans” wouldn’t get him very far if all he was selling were ten-dollar tee shirts.
Whatever your own, personal magic number may be, I hope you find it one day; I hope you find THOSE PEOPLE one day.
Beats chasing gigs for a living….
[Update: Just added this post to EVIL PLANS.]
[Backstory: About Hugh. Twitter. Newsletter. Book.. Interview One. Interview Two. EVIL PLANS. Limited Edition Prints. Private Commissions. Cube Grenades.]

I would suggest that in the 10k hours, that there are plateaus, much like in exercise, where you can stagnate for a while, even give up, or have to push even harder and just. Keep. Going to break through to the next level…

Reminds me of Leonard Cohen song:
Confined to sex, we pressed against
The limits of the sea:
I saw there were no oceans left
For scavengers like me.
I made it to the forward deck.
I blessed our remnant fleet –
And then consented to be wrecked,
A Thousand Kisses Deep.

A Roman legion was actually about 5,000 soldiers. The number varies depending on the time period.

Hugh, did you know that the market in America is so large that if you had a product to sell at $20.00 each, you could sell one item to ten thousand Americans a day, every day for 110 years before you began to sell the same customer a second time?
There are some days I’d be happy to sell one thousand people a day at one dollar each. But then again, the freaking bank and credit card transaction fees eat up most of the profits.
Such is life: We eat what we kill.

@ carbonboy, good point…
Though I’m guessing what separates those who tried and didn’t make it, versus those who did, is about 10K hours.

“He cites Bill Gates being one of the first high school kids EVER to have put in ten thousand hours of personal computer time before going to college”
This is a total urban myth. I met Bill Gates and Paul Allen (the OTHER guy who founded Microsoft and the better programmer of the two) in the 70s after Bill had briefly attended Harvard. There were no personal computers for Bill to have put 10,000 hours into. Granted, there were S-100s, SS-50s and Altairs (which Paul and Bill wrote their first BASIC for), but 10,000 hours of PC time for Bill (or Paul or anyone else in that era) never happened.
I know. I was there. I ran the Seattle Computer Society and met all manner of later-to-be-famous geeks.

@ Mike Drips-
I deleted the word “personal”… I meant “computer time, personally”, not “PC”. I can see where the confusion would lie. Thanks for pointing it out.
As for the facts of how many hours of computing time Bill Gates put in during his young days, take it up with Gladwell…

ONE
The Tao that can told is not the eternal Tao.
The name that can be named is not the eternal name.
The nameless is the beginning of heaven and earth.
The named is the mother of ten thousand things…
TWO
…Therefore the sage goes about doing nothing, teaching no-talking.
The ten thousand things rise and fall without cease.
Creating, yet not possessing.
Working, yet not taking credit.
Work is done, then forgotten.
Therefore the work lasts forever.
(from Tao Te Ching, translation by Gia-Fu Feng and Jane English)

Napoleon Hill talks about a long period of apprenticeship also in order to be good at something in his seminal book “Think and Grow Rich.”

[…] wish I was like a Hugh MacLeod or a Hazel Dooney. Hugh’s prodigious output is a part and parcel of his expertise and it shows. He’s put the hours in. Hazel has battled far worse mental health issues than I […]