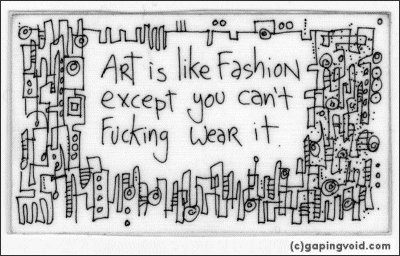 Well, Day Six into becoming a “published author”, and according to Google, a lot of people are already talking about my book. Here are some of my favorite reviews so far:

Seth Godin: “Should Hugh swear so much?” This post re-visits a conversation Seth and I had a year ago, when I was first wondering whether or not to keep the “potty mouth” cartoons out of the book.
David Armano: “The title says it all. You have to decide if what you believe in is good enough to fight for, to pursue, to risk everything for. Only you can decide this.”
Rick Segal: “Hugh’s advice and commentary should be required reading for everybody doing a start-up, coming up with a earth changing idea or dreaming of the day they punch out of that Dilbert-like cubicle.”
Sex On The Beach: “Hugh’s not coming from some lofty ivory tower, but from a real process of hard work and grit. He’s not preachy; he’s simply sharing what he has learned along his path.”
The CRM Blog– One of my longest (and best) interviews ever:

CRM magazine: Do you think creativity is a kind of currency now?
Hugh MacLeod: It’s always been a currency, more so right now because if you’re creating a lot of stuff that’s interesting, valuable, meaningful, that’s a lot safer to me than just pushing paper around a desk all day. Those kinds of jobs are being replaced by computers every day.
We want to be creative. We want to be more useful and tap into something deeper and more meaningful. We don’t want to sit around and be a schmuck our whole lives; what I’m hoping the book will do is get people to start a dialogue with themselves and with other people. It’s an interesting dialogue because [creativity] is such a primal need.

Jerimiah Owyang: “You see, his book Ignore Everybody, really isn’t a book. Instead, you should think of it as as that friend in high school who never followed the rules, but achieved his goals took you out for a beer 20 years later and shakes your shoulders and wakes you up.”

I teach a course in writing memoir at UCLA Extension Writers’ Program (and I am a novelist.) I am going to make every one of my students read your ten questions from David Brain, because your summary of why anyone would write a book is the most dead-on brilliant one I’ve ever read — honest, soulful, realistic. Bravo! Now I’m going to re-post it on my blog. Thanks for sharing.