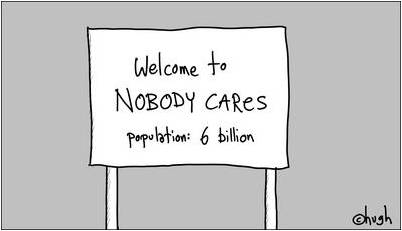 A few months ago I posed ten questions to David Brain, CEO of Edelman Europe, which he kindly answered. To mark the launch of my book, IGNORE EVERYBODY, he asked me ten questions back. Here they are:
1. In a nutshell, why should someone read the book?
Like it says in the very beginning of the book, “So you want to be more creative, in art, in business, whatever. Here are some tips that have worked for me over the years.” I don’t claim to have any special insight in the nature of creativity. However, it’s something I put a lot of thought and effort into over the last few decades, so I have my opinions. I’m just sharing what I know, for what it’s worth.
2. You say, “The more original your idea is, the less good advice other people will be able to give you”. How do people who work for organisations and companies deal with this?
The same way any one else does. Patience, tenacity and good timing.
3. Does the “ignoring everybody” lead to loneliness?
Yes. It’s the price you WILL pay. Only you can decide if it’s worth it.
4. Is the book your social object?
I consider my cartoons my social object. The book, however, allowed me to present them to the world in way I found compelling.
5. By coincidence, I am reading David Ogilvy’s Confessions of an Advertising Man, and your style is somewhat reminiscent of that book which became a kind of handbook to running an ad agency. Is Ignore Everybody a handbook and if so, for who?
I love that book. The introduction where he wrote about working in that high-end restaurant in Paris in the 1930s is probably one of my favorite pieces of writing, ever.
I didn’t have a demographic or a “function” in mind when I wrote the book. But I did think that there were a lot of people out there who, like me, aspired to do something more “creative” with their lives, than what was expected of them. And I thought there’d be no harm in sharing with them what I had learned the hard way, over the years. The premise was really no more complicated than that.
6. What was the motive behind writing the book? I mean I know how little money these things make, but do you want it to help other people better their lives or is it just another evil plan?
I certainly didn’t expect to make any real money from it, and how much it would “help” other people is pretty debatable. But sometimes in your life you have these defining moments, where you draw a line in the sand and declare to the world, “This is who I am, this is what I believe, this is what’s important to me.” I think we all need these moments at some point, to make us better understand who we really are. Writing a book is a good way to force these moments to the surface. That was really the key driver, here.
7. You name some obviously creative people in the book like Picasso and Bob Dylan but in the hard commercial world where you spend part of your life, who are the people who have managed to stay creative that have most impressed you?
I’ve always been most inspired by small businesses that could have been a lot bigger, but the owners decided to say small, because they didn’t want to commodify something that was very dear and special to them. Thomas Mahon over at English Cut, or Amy’s Ice Cream in Austin. But that’s certainly not my only criteria. Doing what you love AND getting paid for it at the same time is actually a really, really hard trick to pull off. Most people can’t do it, but if you can, yeah, you will have earned my respect.
8. You seem to have a love/hate relationship with advertising and advertising thinking (as do I). What’s with that?
The trouble with working in advertising is that you’re basically paid to perform miracles, by people who actually don’t believe in miracles. And the fact that most of the stuff being produced is boring, noisy and obnoxious doesn’t help, either. That being said, when it works, it works REALLY well, and creates a lot of value in a very short period of time. Like all advertising and marketing folk, I just wish the latter happened more often.
9. Creativity and technology have in the past been seen as different worlds but you seem in this and in other work to really enjoy the combination? Why?
It’s not really about the tech per se, it’s about the people. Like yourself, I like smart, driven, passionate people. The tech industry seems to be a place where these people often congregate. So it’s an relatively easy place to hang out in, an easy place to meet interesting folk with interesting ideas.
10. So what are your plans for the book and what next?
I’m toying with the idea of writing a second book, albeit with some trepidation. When asked why she never wrote a second book after “To Kill A Mockingbird”, Harper Lee answered, “Because after that, there was nowhere to go but down”. I can certainly relate!
Being a book author is not important to me. Neither is being a blogger or a marketing guy. Drawing cartoons is important to me. I know that if I keep on drawing the cartoons, interesting things will come out of it eventually, so my plan is to to just keep focusing on that.
[P.S. This was cross-posted on David’s blog here.]

The number of quotes we all now use that came from that Ogilvy book are incredible:
“Pay people peanuts and you get monkeys”
“Don’t keep a dog and bark yourself”
“Leaders grab nettles”
“Hire people who are btter than you are”
“You can’t save souls in an empty church”

I think the book is a secondary social object, the physical artifact. Linking your insights in cartoon form with your insights in paragraph form works very well, very compelling indeed.
http://vinylart.blogspot.com/2009/06/why-did-i-buy-hughs-book.html
Peace.

I think your interview and book were brilliant! I love your ideas, cartoons and pov. Thank you for sharing!

[…] You also probably find them very boring because very few people actually have something interesting to say. […]