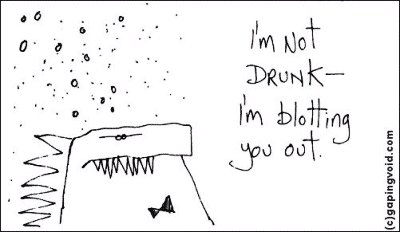 My recent interview with Lateral Action got me thinking about “Myth”:

The way artists market themselves is by having a great story, by having a “Myth”. Telling anecdotal stories about Warhol, Pollack, Basquiat, Van Gogh is both (A) fun and (B) has a mythical dimension… if they didn’t, they wouldn’t have had movies made about them. The art feeds the myth. The myth feeds the art.

We all know how mythologies build up around art and artists, that over time informs the artist’s work itself.
Warhol’s weirdly destructive social scene at The Factory in the 1960s. Pollack’s excessive drinking. Van Gough’s descent into madness. Keith Haring’s wild party times in the New York gay scene…
Let’s say you spent a sizable chunk of money on a work by an artist you love. Let’s just say you couldn’t really justify it financially, you probably couldn’t afford it, but dammit, you just HAD to have it.
Let’s say you’re showing off the work to a friend, which is now proudly hanging in your office. Let’s say your friend never heard of the artist before.
“What???” your friend says, “You spent HOW MUCH on that? But it’s only some green and blue blotches!”
So you give your friend some background information. You tell him how famous the guy was back in New York in the 1970s, how “Breakthrough” his work was at the time, how he was influenced by Famous Artists A, B and C, and how he went on to influence Later Famous Artists X, Y and Z. You tell anecdotal stories about his tumultuous marriage to a famous, Japanese novelist [who’s work is also now making a comeback], and his up-and-down, booze-soaked relationship with Famous Artist K, his brief, heartbreaking love affair with Famously Tragic Socialite P, his battle with alcohol and drugs, and the old farm he retired to up in Woodstock, New York.
Hopefully by the time you are done with your story, though he may not end up being a collector of the artist himself, he at least will understand more clearly the work’s resonance, and why you made the purchase.
And of course, so will you. Because it wasn’t just your friend who needed to hear the story. You needed to hear the story, as well. You needed to be able to tell yourself that story, that story NEEDED TO EXIST, or else you simply would have not bought the painting in the first place. Without the story, without the “Myth”, you could not have justified purchasing the work to yourself [let alone your wife].
We don’t just do this for $40K works of art, we use the some mythological techniques when we buy computers, breakfast cereal, or bars of soap. Our lives are only as meaningful as the myths we can create for ourselves. And we like to create myths around the objects that fill up our lives. That’s what “Branding” is all about.
The more I think about marketing art, the more I think how what I’m learning applies to marketing everything else. Because art is not particularly utilitarian, the myth is key.
And unless you can understand the myth that informs whatever product you’re trying to sell, the harder your job will be. The more you can TRULY understand the myth, the bigger an edge you will have over your competition. I am right on this one.