[The t-shirt design for tonight’s shindig etc.]
After a couple of weeks of back-and-forth between Stormhoek, our US importer and our local distributor, I am pleased to announce that Stormhoek is now available here in Alpine, Texas.
To celebrate I’m throwing a party tonight at Harry’s Tinaja, my regular local watering hole, at 8pm. There will be Stormhoek wine for the tastin’, cheese and crackers, plus my friend Israel has smoked up some awesome mango beef jerky for the occasion. I’ve also hired my favorite local band, The Doodlin’ Hogwallops to play live. 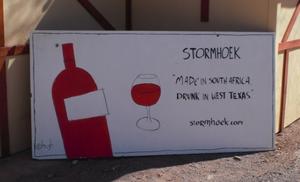 [The Stormhoek billboard, currently leaning against the outside wall of Harry’s, right by the main road in town, where everybody can see it etc. Click on image to enlarge.]
Besides that, my buddy Loren Feldman is in town, wielding his video camera, so there should be plenty of footage uploaded online soon.
Re. the “Dream Big” t-shirt. Yes, that sentiment is printed on the back label of the Stormhoek bottle. It’s also a line that seems to resonate with people round these parts [Few people move to the middle-of-nowhere West Texas desert without some sort of alternative-lifestyle-dream-action going on, so there was a tangible alignment there.] As I’ve been saying for a while, “We’re into the same kind of things you’re into” works better as a marketing strategy than, “Here’s why you should buy our product.” 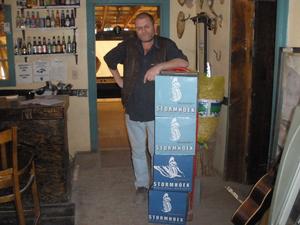 [Harry, with the first cases arriving etc.]
Secondly, Re. Wine marketing: Usually, when an imported wine launches in the States, a familiar pattern emerges. Hire New York or SF restaurant for the evening. Organize wine tasting. Try to get the usual freeloaders, PR wannabe’s, and random warm bodies to attend. If a C-List celeb somehow turns up by some Miracle of God, become ecstatic. Send Press Release out to the usual suspects in the media. Watch Press Release be utterly disregarded by All & Sundry. Watch absolutely nothing happen afterwards. Witness the entire story disappearing into the dustbin of history within nanoseconds. And so on.
So we at Stormhoek decided to go in the exact opposite direction, as far away from the Usual Suspects as possible. “Hey, let’s launch in Alpine, Texas! Let’s see if we can get real West Texan cowboys to like South African wine! It’s totally insane! It’s totally futile! It’s totally wrong! Let’s do it anyway!”
Plus ca change…
[UPDATE: We’ll be streaming the party live. Check mine or Loren’s Twitter for updates.]