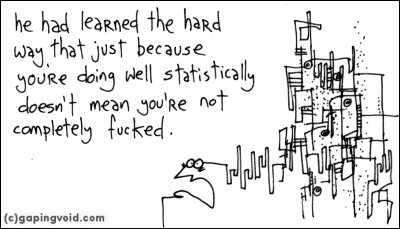 Back in 2004, I came up with probably my favorite marketing-related insight ever:

“THE MARKET FOR SOMETHING TO BELIEVE IN IS INFINITE.”
We are here to find meaning. We are here to help other people do the same. Everything else is secondary.
We humans want to believe in our own species. And we want people, companies and products in our lives that make it easier to do so. That is human nature.

If people like buying your product, it’s because its story helps fill in the narrative gaps in their own lives.
Human beings need to tell stories. Historically, it’s the quickest way we have for transmitting useful information to other members of our species. Stories are not just nice things to have, they are essential survival tools.
And yes, the stories we tell ourselves are just as important than the stories we tell other people.
Ergo, marketing is not about selling. Marketing is figuring out where your product stands in relation to personal narrative.
So where does your product fit into other people’s narrative? How does telling your story become a survival tool for other people? If you don’t know, you have a marketing problem.
Narrative gaps. It’s all about the narrative gaps.

“So I looked with fascination at those people in their mobes [cars], and tried to fathom what it would be like. Thousands of years ago, the work that people did had been broken down into jobs that were the same every day, in organizations where people were interchangeable parts. All of the story had been bled out of their lives. That was how it had to be; it was how you got a productive economy. But it would be easy to see a will at work behind this: not exactly an evil will, but a selfish will. The people who’d made the system thus were jealous, not of money and not of power but of story. If their employees came home at day’s end with interesting stories to tell, it meant that something had gone wrong: a blackout, a strike, a spree killing. The Powers That Be would not suffer others to be in stories of their own unless they were fake stories that had been made up to motivate them.”