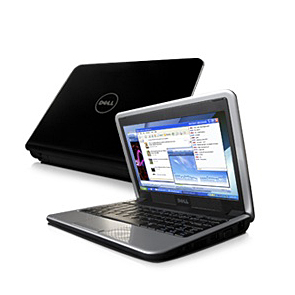 The kind folks at Dell recently gave me a new Mini to try out. Here are my notes.
1. It’s inexpensive, light, small, and fun to use. I call it my “coffee shop computer”- it’s good for traveling, it’s good for surfing the web, writing docs and sending emails from Starbucks. It’s good for very basic programs- Mozilla, Skype, etc, it’s not designed for something heavy like Photoshop. It all depends on what your needs are. I use it as an on-the-go alternative to my main computer, not a replacement for it. The small keyboard I found a bit fiddly at first, but I soon got used to it. Now I’m fine with it. I like it A LOT more than I thought I was going to. I own four computers- it turns out this is the one I now use the most, without question.
2. Before this came along, my main workhorse was a Mac laptop. I toted that everywhere. Now I just leave it my office. Macs are great computers, don’t get me wrong, but they’re expensive and with the exception of the Macbook Air, a lot heavier to lug around than the Mini. Because of the price, the prospect of losing a Mac on the road is a lot more daunting than losing a Mini. Last month when I flew to Amsterdam I just took the Dell Mini along with me- I left the Mac behind- and got on just fine.
3. Of all the computers I’ve ever owned, this by far has gotten the most attention from random members of the public. People come over to me all the time when I’m out and about, amazed that a proper computer could be so small. It gets the most attention from women- they like that a computer could fit in their handbag. They like the prospect of not having to lug something larger and heavier around with them.
4. As Dell is a client of mine, I find it encouraging that they could come up with something that credibly competes with Macbook Air on its own terms, rather than just making a cheaper, less elegant version of the latter. Before I got the Mini, I was thinking of buying a Macbook Air. I no longer am.
5. From what I know about the iPhone and the Blackberry [i.e. quite a bit, but nothing too extreme], I’d much rather surf the web with the Mini, than with a phone. Sure, the Mini doesn’t fit into my jeans pocket like a phone can, but it does fit easily inside my denim jacket’s inside pocket. That’s not a bad compromise.
6. A lot of the time I simply don’t feel like schlepping my backpack around. I have this much smaller bag that I use most of the time, just big enough to carry around some pens, a small notebook and blank business cards to draw cartoons on. The Mini is small enough to fit into that, which I’m REALLY pleased about.
7. All in all, I’m very happy with it. I think Dell might have a wee hit on their hands with this one. Good news.
8. I was under no obligation from Dell to blog about the computer. They didn’t ask me too, nor did they even drop any subtle hints my way. I certainly wasn’t planning on blogging about it, but I mentioned on my Twitter feed a few times that I had a new Mini, and a lot of people started asking me questions. In order to answer them properly, I decided a blog post was in order.
9. Would I buy one myself with my own money, had Dell not be so generous? Sure. Having used it for just over a month, I now can’t imagine not having it around. Rock on.

Glad you posted. I’ve been thinking about one for the same reasons. I love my MBP but it’s big and heavy. Some clients of mine are using the mini 9 as an aux device, mostly for streaming and stuff like that. I assume you have the XP model. I’ll plan on one for Dec and use it the same way. We have most of our stuff in the cloud so the Mini should do most things with the exception of graphics/Photoshop and so on.

It’s cute! I was thinking about getting one when I bought my first computer, but decided it wouldn’t be good as my ONLY computer, but your post made me second guess a bit. What do you think?

Hugh: glad you like the mini 9. I’ve just played around with it myself here at the office, but haven’t had a chance to fully use one at length. Glad you didn’t find the size of the keyboard to be an issue. Was your system running XP or Ubuntu?
Bruceericatdell

Sounds interesting I suspect it might work as an on the go podcasting machine. Ubuntu getting loaded on it would probably not be too difficult either, interesting.

Very useful review, thanks. I’ve been dithering between buying one of these or a more expensive Dell laptop… Looks as if you’ve lost your client some money 😉

Great to hear about how/where you’re using the Mini, and the unique benefits you’ve identified. One of the most interesting/encouraging aspects of feedback like yours — and there has been a lot — is how the more you use the Mini, the more you find it complements rather than competes with your go-to laptop.

Convergence be damned! Categories diverge, always have! (Then weaker branches rot and die and ultimately drop from the tree).
Dell have been doing some interesting stuff lately. Pity that, personally, Windows is a deal-breaker and GNU/Linux has plenty of passion but let’s face it, belongs on the pug bus of personal computing right now.

I think this is a step forward for those of us who need basic stations on the road for storing photography, podcasting, simple audio tasks, blogging from the edges, the parks, mountains and cetera.
The iphone is powerfull but too small, and I actually use my Macbook as my main machine, its strong enough to handle media design, photoshopping, after effects and full multitrack recording – I can therefore travel with a recording studio (guitar, digibox & emu) fairly easily. But the machine becomes a bit sacred in this sense…
I`d enjoy something like this, but have to say much as I`ve used windows in the past, the swiss cheese nature of security, flaky media handling and general malaise puts me off: ubuntu and xp….what? At least its not vista.
Sorry; did I mention that Vista was the worst bloody product
…ever!

Sorry; did I mention that Vista SP1 was the best Windows OS…ever!
I use it for intensive pro video editing on Edius 5 on SpeedEDIT /
Rock Solid …

I wonder if Windows 7 will work on ultra compact notebooks. Small notebooks are an interesting market segment, but the only OS options are Linux and 7 year old Windows XP.

Aero Heros, kool and the gang…
sound good . glad to hear there is someone who enjoys vista…but rockin` a vast range of software e.g. Final Cut, Atmosphere, Metasynth, Protools, Adobe CS3 master collection, Logic, on a machine smaller than a dinner tray, and never had an error, really cooks. With built in camera, airport, imovie and idisk storage for easy collaboration across the water means in my humble opinion there is no contest!

So there I was at Blog08, getting all the attention for having a Dell Mini, and Hugh came and sat next to me, and stole some of my limelight!
Concur – it sparks a lot of interest in passers by, all extremely positive. I think it’s the concept of a netbook more than anything, but the little Dell packs quite a punch in such a small package.
It really does feel like a completely different type of machine. Its not a laptop. And you treat it that way. You can throw it into a (small) bag, not worry about moving parts (solid state – yes!), or about breaking your shoulder. The battery last for ages.
It’s definitely not a work horse, but for blogging, watching videos on the move, browsing the net, or even as an emergency computer to remote desktop into your main machine (as I use it), it’s brilliant.
The keyboard does take some getting used to, but it’s way better than almost all the other netbooks currently available, bar one perhaps. (The first manufacturer to deliver a foldout full size keyboard would do extremely well.)
Add some set-it-and-forget-it syncing software (I used Windows Live Mesh) and everything just “works”.

Do you use the Office suite on it (2007)? If so, how does it run. If I bought one it would be to use Office extensively out-of-town.
THX.

Meh, I don’t see myself getting one. It looks okay; but the fact that it’s just a tiny-screened Windows platform is the biggest turn off.
Especially traveling, there are just new opportunities for someone to attack my machine; and Windows is just so incredibly vulnerable.

My Mini is about to embark on its first overseas trip. I have a larger lap top that I usually take, but I analysed why I carry one with me at all and Mini will take up less room, weigh less, and provide all the storage space that I need. I have already taken it to two conferences, hitched it up to data shows, wifi etc. I’ve very pleased with it. And it fits in my handbag!
Oh! and I installed Open Office on it.

Do they sell it without microsoft windows?